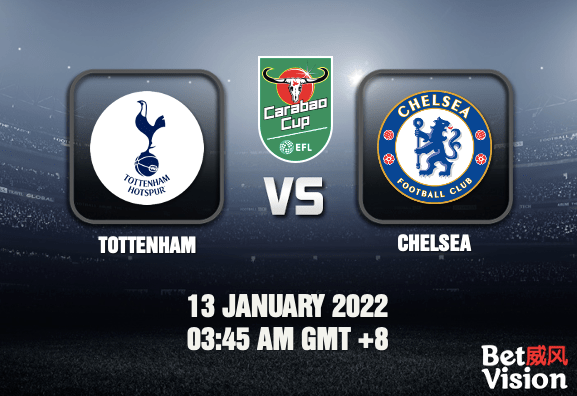 Tottenham v Chelsea EFL Cup Prediction (Carabao Cup) – After a tense first leg at Stamford Bridge, Chelsea now head over to Tottenham Hotspur’s home ground to decide the EFL Cup semi-final day. Could the Blues knock out their London neighbours from the competition? Or will Spurs bounce back? Have a look and read on for our winning tips below.

Tottenham’s loss in the first leg ends the team’s undefeated streak across all competitions, but they bounced back with a win in the FA Cup. Meanwhile, Chelsea followed up their victory against Spurs with another one in the FA Cup third round. Next up, we look at each side closely.

Tottenham Hotspur find themselves two goals behind as Chelsea dominated them at Stamford Bridge. Spurs conceded a goal as early as five minutes, as Davinson Sanchez was not able to stop Kai Havertz’ superb kick. Dismal play had the Lilywhites changing to a back four in the second half, and at the 50th minute Harry Kane’s free-kick was saved by Kepa. And while Hugo Lloris denied chances by Romelu Lukaku, Hakim Ziyech and Timo Werner, they went further behind as Japhet Tanganga defensive header grazed off of Ben Davies and resulted in an own goal. Manager Antonio Conte was visibly unhappy, admitting Tottenham had difficulties and Chelsea were the better team. And while they got back into form in their FA Cup tie against Morecambe (3-1), they also suffered a huge blow with Son Heung-min being injured. Seeing this, could they still turn around their fortune in the League Cup?

Chelsea asserted themselves as one of England’s top teams with their domination of Tottenham in the first leg. Kai Havertz had the Blues ahead by the fifth minute as he went for Marcos Alonso’s through ball and struck it into the net. Ben Davies’ own-goal in the late stage of the game was an added bonus, giving Chelsea an aggregate lead of 2-0. Manager Thomas Tuchel praised the commitment of his players, as they started off strong and kept the momentum going. They also got an added boost with their most recent win in the FA Cup, seeing off Chesterfield 5-1 in the third round. Can they hold on for the big finish at Spurs, even with Ngolo Kante doubtful and Reece James and Thiago Silva on the injured list? We shall see.

Tottenham will be feeling the pressure as they try to mount a comeback from home, However, with Son absent and Harry Kane carrying most of the load, it will not be enough to overcome Chelsea’s defensive wall. Spurs may be able to sneak in at least one goal, but Lukaku, Werner and Havertz will answer back with full ferocity. Thus, we see the Blues moving on to Wembley. With that, let’s look at the prediction.

For this Tottenham v Chelsea EFL Cup Prediction to win, Chelsea need to win by at least one goal. For the Over/Under bet to win, the total goal count should be above 2.25 goals.