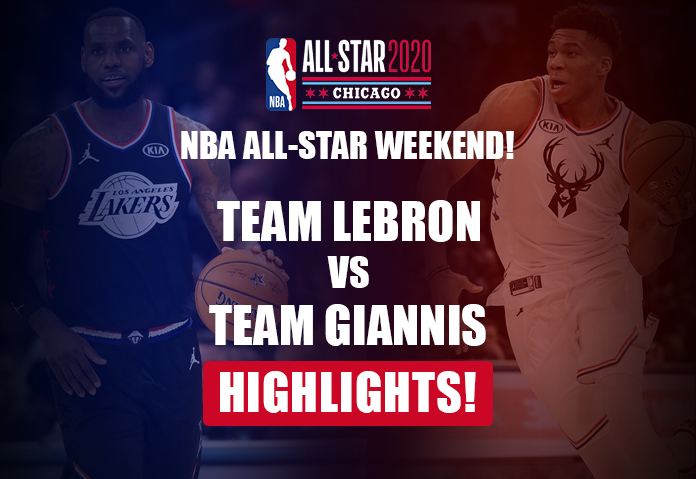 Team Lebron vs Team Giannis Highlights! It’s the NBA All-Star Weekend in Chicago! All of the greatest players in the league got together in a match of a lifetime, It’s Team Lebron vs Team Giannis! The NBA All-Star Weekend this 2020 is special as it is offered as a tribute to one of the league’s greatest players, Kobe Bryant. Check out the format, lineup, and highlights below!

The game format is new! The first three quarters of the match were individually scored as separate games. The scoreboard is reset during halftime. For the team that won each quarter got $100,000 for their respective charities; if tied, it would be added to the pot of the next quarter. At the end of the third quarter, the combined score of the three quarters is posted. In the final quarter, the combined score of the team that is ahead, plus 24, in honor of Kobe, will be the final target score. The first team to reach the number will win the game and no clock.

The match was all fun and games as both teams showcased their scoring potential all over the court! No defending was seen but an all-out offense for both of the teams. At the end of the 3rd Quarter, Team Giannis is up by 9 points! The score was 133 – 124 in favor of Team Giannis. The 4th quarter came and the intensity of the teams went up from 0 to 100! There is no shot clock and the target score is 157. It was an intense back and forth between the teams!

Giannis blocked Lebron.Team Lebron started on raining threes throughout the match. Alley-ups from Lebron and Davis! The match is tightly contested for this point as the teams’ score is 156-155. A pass from Lebron to Anthony Davis resulted in a foul. He missed his first and makes the second bringing Team Lebron the victory over Team Giannis 157-155. Kawhi Leonard wins the All-Star Game Kobe Bryant Award!

Team Lebron got the win as they outscored Team Giannis 33-22 points during the 4th quarter. Both teams had fun and it was a great game that really showed the talents of the NBA.

For more of the best sports news, highlights, previews, gossip, and tips Check us out!