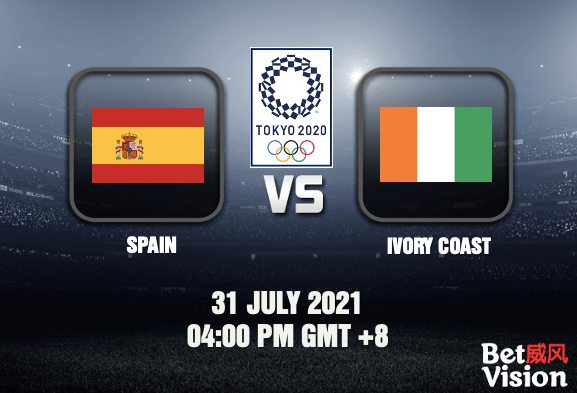 Spain v Ivory Coast Prediction (Tokyo 2020) – Spain and Ivory Coast will battle each other for place in the semi-finals in Olympics men’s football competition in Tokyo. Will the young Spanish squad continue their dominant form, or can the Ivorians pull off a surprise? Have a quick look and read on for our winning tips below.

Both sides have had similar results, but happening at different times. Spain ended their group campaign with two draws and one win, producing two goals and conceding one. Ivory Coast started off with a win, but settled for two draws afterwards, scoring three goals and allowing in two while doing so. Let’s take an in-depth look into both teams.

Spain ended their group campaign atop the table of Group C. They had to settle for a 1-1 draw with Argentina in their last match. Mikel Merino made the breakthrough in the 66th minute, putting the Spain U23 up 1-0. The Argentinians then responded 21 minutes later with Tomas Belmonte netting in the equaliser. Neither side was able to capitalise moving forward, and Argentina was eliminated from medal contention, as Spain moved into the knockout phase. Manager Luis de la Fuente said that he was proud of his players’ performance, as well as their attitude of looking out for each other in these games. They now have their sights set on a medal as they barge into the knockout stages and take on the Ivorians next.

Ivory Coast were able to finish second in Group D after taking on formidable competition in their group. After beating Saudi Arabia (2-1) in the opener and holding Brazil to a scoreless draw, they finished their group campaign by drawing 2016 silver medalists Germany 1-1. The German U23 had a strong start, but the Ivorians were able to find their footing, and took the lead in the 67th minute when Benjamin Heinrichs made an own goal while put under pressure by Youssouf Dao. Germany bounced back six minutes later when Eduard Lowen netted in a free kick. They could not however get into the lead, and failed to qualify for the quarter-finals. On the other hand, the Ivory Coast side under manager Soualiho Haïdara book their ticket for a matchday against a strong Spanish side.

Spain will once again be the favoured side coming into this game, despite Ivory Coast fending off challenges from traditional powers like Brazil and Germany. We see Spain asserting themselves early on, scoring at least two goals in the match and keeping a clean sheet. The Ivorians will put up a valiant match, but the talent and depth of Spain could not be denied. Let’s take a look at the prediction. For this Tokyo 2020 Olympics Men’s Football Quarter-final Match Spain v Ivory Coast Prediction to win, Spain need to win the match with a two-goal lead. If they draw the match, the bettor would lose all of the stakes. For the Over/Under bet to win, the total goal count should be below 2.5 goals.