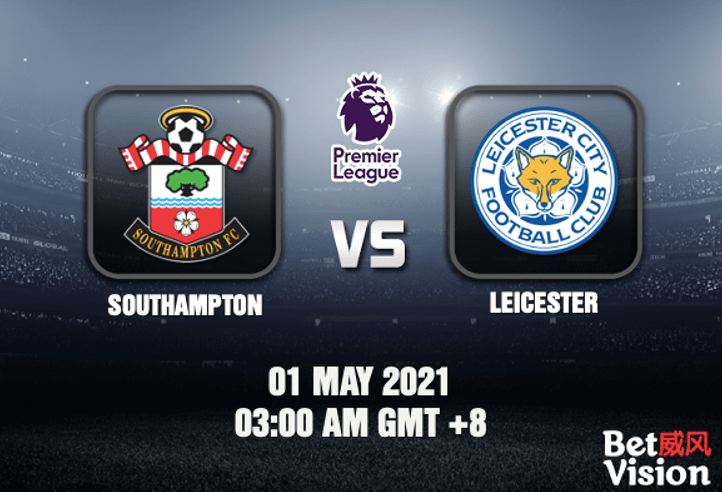 Southampton v Leicester Match Prediction (EPL) – The Saints are playing host to the Foxes this week in the Premier League. In their previous encounter at King Power Stadium, Leicester prevailed 3-0. Can Southampton avoid a double on their home turf? Let’s take a look and read on for our winning tips below.

Southampton are in a slump, having only one win in five EPL encounters. Leicester, on the other hand, are coming off two consecutive EPL wins. Let’s take a look at their current season performance.

Southampton are at 15th in the table in the Premier League, just a few points clear of relegation. They fell to Tottenham Hotspur, 1-2, in their last encounter. Danny Ings opened the scorelines at 30′ with his header off of  James Ward-Prowse’s corner. However, Spurs equalised at 60′ with Gareth Bale’s effort, and Son Heung-Min converted a penalty at 90′, completing the hosts’ comeback. Manager Ralph Hasenhüttl suffered his third straight loss (including their semifinal tie where they incidentally beat by Leicester), and has many questions to answer regarding his side’s form. For now, the focus is for them to get back to their winning ways by the next match.

Leicester City are comfortably seated at 3rd in the table, with only the two Manchester sides in front of them. They were also able to qualify for the FA Cup Final after knocking out Southampton, whom they are facing again this week. Their last EPL assignment saw them score a comeback win over Crystal Palace, 2-1. After Wilfried Zoha drew first blood with his goal at 12′, Leicester struggled against the Eagles’ defence. But star Kelechi Iheanacho helped the Foxes by providing the assist to Timothy Castagne for a goal at 50′ and scoring a goal of his own 80′ to make the come-from-behind win. Manager Brendan Rodgers praised his boys’ desire during the game, and hopes they will show the same as they take on the Saints anew.

As the season draws to a close, Southampton will be doing everything to finally eke out some wins. Walcott and Takumi Minamino will most likely be counted on for the Saints’ offence, with Ings out. But with the way Leicester is playing, and with Iheanacho’s recent phenomenal performances, all signs point to a victory by the Foxes. Let’s take a look at our predictions. For this Premier League Southampton v Leicester Match Prediction to win, Leicester need to win the match with a one-goal lead. If they lose the match, the bettor would lose all of the stakes. For the Over/Under bet to win, the total goal count should be below 2.5 goals.