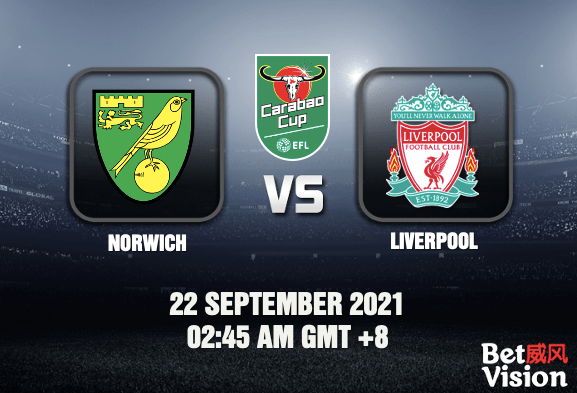 Norwich v Liverpool Prediction (EFL Cup) – Norwich City hosts Liverpool FC in the third round of the 2021/22 EFL Carabao Cup. The last time these two sides met was just almost a month ago in the Premier League. The Reds defeated the Canaries 3-0 in that contest at Carrow Road. Will things turn out differently this time? Have a look and read on for our winning tips below.

Norwich have lost all but one of their last five matches, with the exception being their League Cup win over Bournemouth. Liverpool, on the other hand, have stayed undefeated in their last five outings. Next up, we look at each side closely.

Norwich City have advanced to the third round of the EFL Cup by beating EFL Championship side Bournemouth 6-0 at Carrow Road. It was a total blowout of a game, as two players were able to get braces: Christos Tzolis (12′, 66′) and Josh Sargent (49′, 75′). Kenny McLean (26′) and Lukas Rupp (34′) also contributed to the scoreline. However, this game is far from their showing in the Premier League, to which they were promoted to this year. The  Daniel Farke-managed side are currently at the bottom of the table, and one of their conquerors this season also happen to be their next opponent. Could they pull through with the win this time?

Liverpool have hardly missed a step in the beginning of this season, as they have been undefeated in their first five Premier League matches, and managed a comeback win against AC Milan in the UEFA Champions League opener. They have however had key people sideline to injuries, such as Trent Alexander-Arnold, Robert Firmino and infamously, former Blackburn Rovers loanee Harvey Elliott. Nevertheless, manager Jurgen Klopp has harnessed a winning formula for his active squad; one that will be tested when the Reds enter the EFL Cup competition against the Canaries this week.

Norwich have yet to win or draw against a Premier League side this season. Having to face “Big Six” club spells a huge amount of trouble for the Canaries at this stage in the competition.  Norwich will be counting on the support of locals in the audience, which will have a good turnout for this tournament. But the well-oiled Liverpool machine will simply be too much for the home team, paving the way for an easy advance for the Reds. Let’s look at the prediction.

For this EFL Carabao Cup Norwich v Liverpool Prediction to win, Liverpool need to win the match in full time with a two-goal lead. If they draw the match at full time, the bettor would lose all of the stakes. For the Over/Under bet to win, the total goal count should be above 2.75 goals.