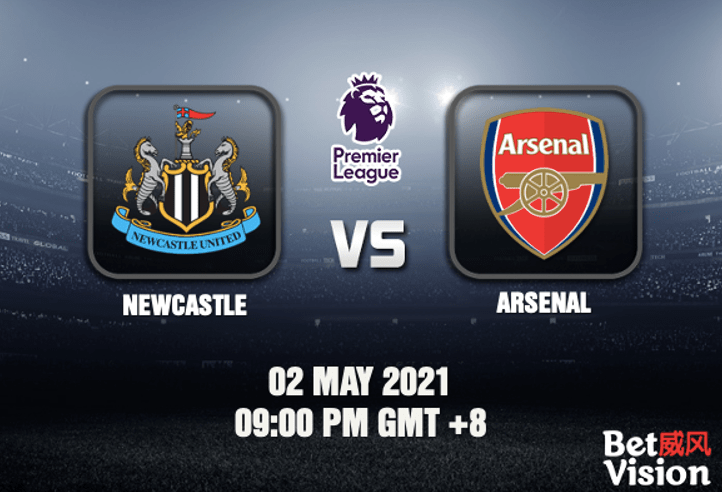 Newcastle v Arsenal Match Prediction (EPL) – Newcastle United takes on Arsenal in matchweek 34 of the Premier League. In their previous encounter, the Gunners gave the Magpies a clean sheet (3-0). Can Newcastle win this time? Read on for our winning tips below.

Newcastle have had only one loss in its last five outings. Arsenal, meanwhile, have been inconsistent in their form, and have lost the first leg of their UEFA Europa League semi-final against Villarreal (1-2) on top of that. Let’s now move on to their current season performance.

Newcastle United is currently 16th in the Premier League table, a few points above the relegation zone. They most recently denied Liverpool a victory at Anfield, drawing them at 1-1. After Mohamed Salah scored early at 3′,  Joelinton tried to answer back but was denied by Alisson. Substitute Callum Wilson had a goal overturned by VAR when a handball was spotted. Joseph Willock was the saviour late in the game as he scored fresh off the bench at 90+5′. Manager Steve Bruce was delighted by the “terrific point” the Magpies gained as a result, but they would need to produce more wins to stay safe in the league for the following season.

Arsenal are holding steady in the middle of the league table, with their hopes for a European slot next season likely resting on their Europa League performance. Their last EPL game saw them incur a painful 0-1 loss against Everton. A penalty for the Gunners in the second half was taken back when Nicolas Pepe was found offside in the VAR review. AT 76′ Bernd Leno carelessly handled Richarlison’s shot, leading to an own-goal. Manager Mikel Arteta and his men are also behind Villarreal in their European fixture, with Pepe giving the Gunners’ only goal in their 1-2 loss. This match with Newcastle will be their chance to regroup while waiting for the follow-up clash at Emirates Stadium.

The absence of Willock will affect Newcastle profoundly, as they try to gain more points to remain in the prems next season. Even with Arsenal still trying to find their footing, their superiority in the stats and better player lineup makes them the more likely winner in this outing. Now, let’s take a look at our predictions.

For this Premier League Newcastle v Arsenal Match Prediction to win, Arsenal need to win with a one-goal lead. If they draw the match, the bettor would lose all of the stakes. For the Over/Under bet to win, the total goal count should be above 2.5 goals.