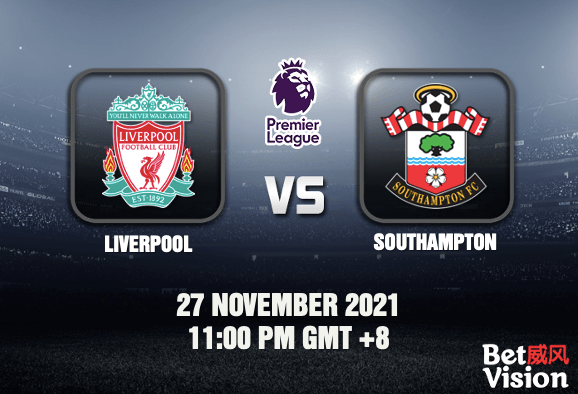 Liverpool v Southampton Prediction (EPL) – Liverpool host the Southampton for this upcoming match week 13 in the Premier League. In their previous encounter in May, the Reds won 2-0 draw at Anfield. Can the Saints finally overcome their Merseyside foes? Let’s take a look and read on for our winning tips below.

Liverpool are back to their winning ways after suffering their first loss of the season against West Ham. Southampton have not had good form, having just one win, one draw and three losses. Let’s take a look at their current season performance.

Liverpool is currently seated third in the EPL table. Their most recent domestic win saw them trash Arsenal 4-0 at Anfield. Sadio Mane headed in Trent Alexander-Arnold’s kick 6 minutes before half time, and Diogo Jota slotted in the ball on 52 minutes to double the lead. After 11 minutes, Mohamed Salah struck into the net, while substitute Takumi Minamino converted Alexander-Arnold’s cross just 5 minutes later. Their most recent match overall saw them emphatically beating FC Porto in the UEFA Champions League, with Thiago Alcantara and Salah scoring within each other in the space of 18 minutes in the second half. Manager Jurgen Klopp is delighted that no one got hurt from his side in the match, even as the Reds have long qualified for the UCL knockout stages. Could they keep the momentum going this weekend against the Saints?

Southampton are currently seated in the bottom half of the EPL table. They absorbed a painful 2-1 loss at the hands of relegation side Norwich City at Carrow Road. Che Adams put the Saints ahead in the 4th minute via a shot of the post, but it only took three minutes for the Canaries to equalise as Teemu Puuki headed in Max Aaron’s cross. James Ward-Prowse and Adams almost took back the lead, but Tim Krul denied both their efforts. After the break, Alex McCarthy saved a shot from Milot Rashica, but was unable to keep out Grant Hanley’s header on 79 minutes, allowing the home team to come from behind. Manager Ralph Hasnhüttl lamented his side’s wasted dominance of the game, as it did not convert to crucial goals. They have their work cut out for them as they face a red hot Liverpool side at Anfield next.

Liverpool are in superb form, and they should handle Southampton with ease. Klopp may opt to rotate his lineup this time around, and with the depth of talent they have, he should be able to put together a squad with a decent attack yet a thick wall of defence at the back. While the Saints could threaten at any given time, the Reds should weather any serious challenge. Let’s take a look at our predictions.

For this Premier League Liverpool v Southampton Prediction to win, Liverpool needs to win the match with a two-goal lead. If they win by just one goal, the bettor would lose all of the stakes. For the Over/Under bet to win, the total goal count should be above 3.5 goals.

Serie A Postponed as Coronavirus continues to spread!