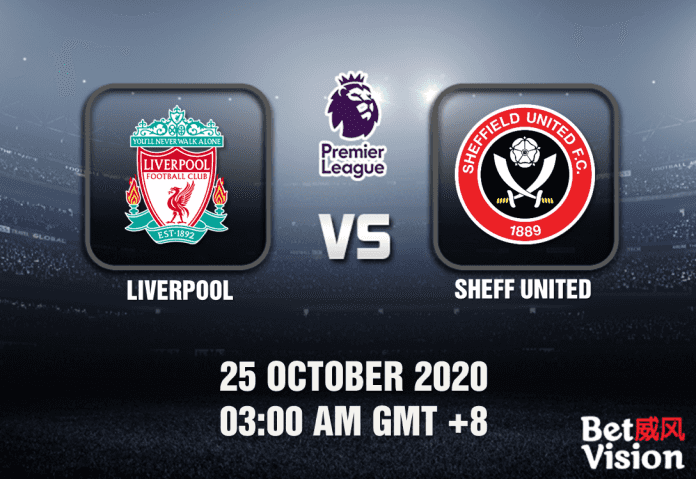 Liverpool v Sheff United Match Prediction (EPL) – The Blades are heading off to Anfield for a head to head clash against the previous season’s champions, Liverpool! In their encounter last January, it was the Reds that took on the victory, 2-0 at the same location. What do you think will win this match? Let’s take a look and read on for our winning tips below!

With Liverpool winning in their most recent encounters against Sheffield, there is no doubt that they will take over this match as well. With the Blades still not adjusted to the new season, we can expect the Reds to make a move to get back to their winning ways. Let’s take a closer look at their previous match performances.

Liverpool is coming in with no wins in their last two matches and is now sitting 3rd at the table. After Sadio Mane‘s first goal, Everton was able to draw the match after 19 minutes into the match. With the intense back and forth, Mohamed Salah scored another one in the later part of the second-half, their attempts at a win were then stomped on by Dominic Calvert-Lewin minutes later. Manager Jurgen Klopp is still dissatisfied with the VAR decision to disallow their last-minute attempt at goal to get a goal. With this, it seems like his men are more than motivated to get a surefire win for this round.

Sheffield is now in the 19th seat at the table thanks to multiple losses across all five games with only one draw to take away. It seems like Manager Chris Wilder is still not used to the rhythm of this new season. With their last match ending in a tie against Fulham, it was them that was chasing the lead and was eventually done in at the 85th-minute by a penalty goal by Billy Sharp. With their performance still dwindling and form not intact throughout the season, it is sure that the Blades will struggle throughout this game against Liverpool.

With Virgil Van Dijk out until next year, we can expect Liverpool to lessen their efforts throughout their defenses. It can be a chance for Sheffield to take at least a goal, but we can see Jurgen Klopp pushing for a more offensive take on his team for this match. A win by Liverpool is seen within a mile, and the Blades going out winless in this encounter. Let’s take a look at our predictions.

For this Premier League Liverpool v Sheff United Match Prediction to win, Liverpool needs to win by two goals. If they lose by one goal, the bettor would lose all of his stakes. For the Over/Under bet to win, the total goal count should be above 3 goals.