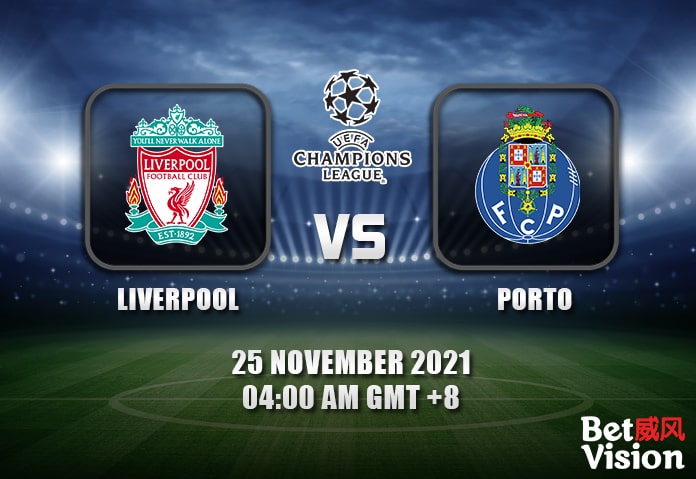 Liverpool v Porto Prediction (UEFA Champions League) – Liverpool hosts FC Porto for matchday 5 of the Champions League. In the most recent meeting of these two sides last September, the Reds pulled off a dominant 1-5 at the Estadio do Dragao. Can the Portuguese club keep their knockout stage dreams alive at Anfield? Let’s take a look and read on for our winning tips below.

Liverpool just suffered their first loss this season, but bounced back immediately with a win. Porto, on the other hand, have been unbeaten in their last five matches across all competitions. Let’s now take a closer look at each side.

Liverpool are comfortably on top of Group B, having punched their ticket to the UCL knockout stages with a 7 point advantage over second placers Porto. They booked a place in the knockout rounds with a 2-0 victory over Atletico Madrid at Anfield. Diogo Jota and Sadio Mane’s goals came within 7 minutes of each other in the first half of their clash with the Colchoneros. They then saw their winning streak come to an end against West Ham (3-2 at London Stadium), but got back into winning form as they trashed Arsenal 4-0, with Mane, Jota, Mohamed Salah and Takumi Minamino having a goal each. Manager Jurgen Klopp will be looking to rotate his squad now that they’ve secured their place in the next round; however, he has warned that they should be complacent against the Dragões.

F.C. Porto will be looking to secure the remaining knockout round slot in the group. They had to settle for a 1-1 draw of their making against A.C. Milan in their last UCL outing. Luis Diaz put the Dragões on the scoreboard on six minutes, but saw all efforts to hold on to the lead go to waste as Chancel Mbemba Mangulu diverted the ball into his net at 61 minutes. They had better showings in their domestic matches after, beating Santa Clara 0-3 in the Primeira Liga and dominating Feirense 5-1 in the Taça de Portugal. Manager Sérgio Conceição, whose side suffered a huge loss to the Reds last time around, feels more confident that they could beat them at Anfield. Would the Portuguese live up to this bold claim?

We expect Liverpool to play around with their lineup knowing that the next UCL phase is in the bag, but even their second unit could handle Porto easily at home. The Dragões, who have a full-strength lineup, will definitely bring the battle to the Reds in hopes of staying longer in the tournament. However, momentum is on the side of the Merseysiders, thus they are our pick to comfortably win this match. With that, let’s take a look at our prediction.

For this UEFA Champions League Liverpool v Porto Prediction to win, Liverpool need to win the match with a one-goal lead. If they draw the match, the bettor would lose all of the stakes. For the Over/Under bet to win, the total goal count should be above 2.75 goals.