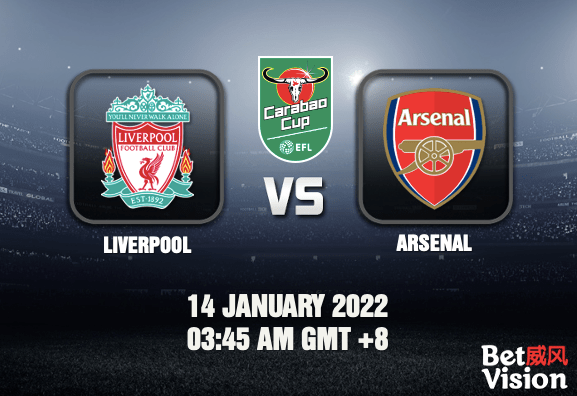 Liverpool v Arsenal EFL Cup Prediction – After the original first leg last week was postponed due to Covid, Liverpool and Arsenal finally get to start their Carabao Cup semi-final at Anfield. These two sides have had intense meetings in the competition in the last three years.  Both their meetings were won on penalties (Liverpool in 2019, Arsenal in 2020). Who will win this time? Let’s take a look and read on for our winning tips below.

Liverpool have had mixed performances in their last five outing across all competitions, with two wins, two draws and a loss. Arsenal, on the other hand, have suffered two consecutive losses across competitions, with a controversial match against Manchester City and an elimination from the FA Cup. Let’s now take a closer look at each side.

Liverpool are looking to win their ninth EFL Cup overall and their first one since 2011/12. They booked their semi-final slot through a thrilling encounter with Leicester City, wherein they came back from a 0-2 deficit to win on penalties. Just when the Foxes would likely hold on to advance on a 3-2 scoreline, Takumi Minamino netted 5 minutes into injury time to set up the shootout. With both sides level at 4-4 after the first round of kicks, Ryan Bertrand’s miss proved fatal for Leicester, and Diogo Jota converted to complete the comeback. The Reds head into the match fresh off a win in their FA Cup tie against Shrewsbury, with Fabinho’s double and Kaide Gordon and Robert Firmino carrying Liverpool to the next round. However, manager Jurgen Klopp would be without some of his best men, with stars Mohamed Salah, Sadio Mane and Naby Keita on AFCON duty.

Arsenal will try to win the EFL Cup for only the third time in club history; the first time since 1992/93. The Gunners booked their ticket by beating League One side Sunderland 5-1 in the quarter-final. Eddie Nketiah amazed everyone with a hat-trick, and Nicholas Pepe and Charlie Patino added a goal each. They have struggled in 2022 so far, as they blew a 1-0 lead to Man City in the EPL, and bowed to Championship side Nottingham Forest 1-0 in the FA Cup Third Round. Manager Mikel Arteta will also be missing a couple of his men to AFCON duty, but regular starters such as Alexandre Lacazette, Martin Odegaard and Kieran Tierney are most likely to make the cut.

With Salah and Mane out, Liverpool will look to Jota and Minamino to lead the attack, while Van Dijk watches the back. All things considered, this should be enough to hold off Arsenal, even as the likes of Bukayo Saka and Gabriel Martinelli look to score a goal. We can also expect the Merseysiders to shine at Anfield even without their usual big-hitters, so they should take this leg convincingly. Let’s take a look at our predictions.

For this Liverpool v Arsenal EFL Cup Prediction to win, Liverpool needs to win the match with a single goal lead. For the Over/Under bet to win, the total goal count should be below 3.25 goals.