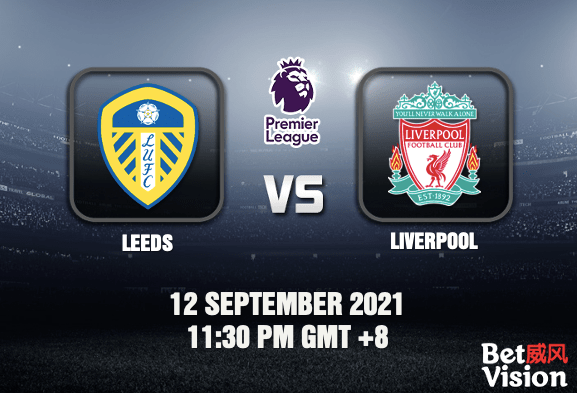 Leeds v Liverpool Prediction (EPL) – Leeds United will be hosting Liverpool for this upcoming match week 4 in the Premier League. In their previous encounter, the match ended in a 1-1 draw at Elland Road. Will one club come out on top in this one? Let’s take a look and read on for our winning tips below.

Leeds have yet to win a match this season, as they currently have one loss and two draws. Liverpool meanwhile is undefeated, with two wins and a draw. Let’s take a look at their current season performance.

Leeds United are at 15th in the Premier League table after three games. They drew their most recent encounter against Burnley (1-1) when they visited Turf Moor. The first half was goalless, as attempts from Leeds’ Patrick Bamford and the Clarets’ Chris Wood went wide. Wood then broke the deadlock on 61 minutes with a touch to Matthew Lowton’s shot for the 60,000th EPL goal. However, the Whites thwarted the hosts’ impending victory as Bamford converted Jamie Shackleton’s cross with four minutes remaining. Manager Marcelo Bielsa was satisfied with the outcome, claiming his side dominated the play. They next host the Reds, who are title favourites this season.

Liverpool have landed just outside the top four of the league table after the first few games. After two wins to open the season, they settled for a 1-1 draw with Champions League winners Chelsea at Anfield. The Blues’ Kai Havertz opened the scoring on 22 minutes, but Reece James was then sent off for a hard challenge on Sadio Mane’s close-range shot. Mohamed Salah converted the penalty to level the score, but the Reds failed to capitalise on their one-man advantage. Efforts by Virgil van Dijk, Fabinho and Andrew Robertson were saved by Edouard Mendy. Manager Jurgen Klopp hailed Chelsea’s efforts, saying that the London side deserved the draw. He and his men now hope to redeem themselves as they head to Leeds for their next fixture.

With Leeds not having key players such as Raphinha (who will miss this weekend fixtures like all Brazilian internationals) and Mateusz Klich, it is up to Bamford and Kalvin Phillips to lead the Whites against the fiery men of Liverpool. The Reds will also be missing Brazilians Alison and Fabinho in the lineup, however the attacking trio of Salah, Mane and Diogo Jota will prove too much for the hosts.  On that note, let’s take a look at our predictions.

For this Premier League Leeds v Liverpool Prediction to win, Liverpool need to win the match with a two-goal lead. If they draw the match, the bettor would lose all of the stakes. For the Over/Under bet to win, the total goal count should be above 3 goals.