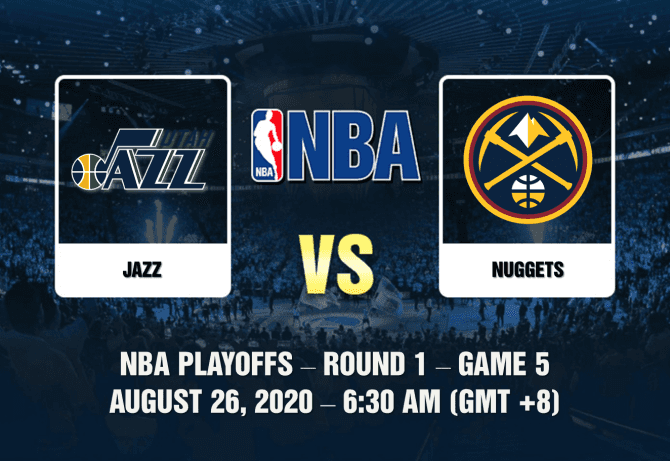 Jazz v Nuggets Prediction Game 5 – (NBA) – August 26, 2020 – 06:30 AM (GMT+8) – Round 1 – It’s the final push for the Utah Jazz to get past against the Denver Nuggets in this upcoming game! With the Jazz leading the series 3-1, they are going to go for the advance. Will the Nuggets stop them? Let’s take a look and read about our prediction below!

The Denver Nuggets have been struggling to get a win since game 2 of the series. Their crushing defeat in game 3 is still embedded in the team, resulting in a loss of 129-127 in the previous encounter. Despite outplaying the Jazz in the 4th quarter, their earlier mistakes have caused them the loss. Jamal Murray just carried the team with 50 points on his back. Nikola Jokic also got 29 points to get a solid for the team. With their performance improving each match, there is a chance that they can come close to Denver in this one.

Coach Michael Malone needs to rethink his strategy ahead of the competition to stay in the playoffs. This might be the end for them if they are not able to push forward.

With Jamal Murray dropping nine 3-pointers, there is nothing that can stop this guard to get his team off the ground. If he is able to get into the zone the same as his franchise record, there is no denying his ability to get his team the work in the upcoming game.

Winning 3 games straight in a series is just another feat for the Utah Jazz. With their latest being a close one, there is no denying that they can put on the pressure in the upcoming match against the Nuggets. Donovan Mitchell just had 51 points, one more than Jamal oft he Nuggets, to get the win in the match. Mike Conley Jr. had 26 points, and Jordan Clarkson held 24 points to make the win possible for the team. With the team’s shooting percentage in the high 50’s, there is no doubt that they can take out the Nuggets to advance in this round.

Coach Quin Snyder can put on the pressure and make more aggressive plays as they lead the series against Nuggets. His push can get the team past round 1 of the playoffs.

Donovan Mitchell is going to contribute another night in this game. His 51-point game surely is undeniable and can make the possible rise of Utah in the ranks. A repeat performance is expected and will be the best option for Jazz moving forward.

For this Jazz v Nuggets Prediction Game 5 to win, the Utah Jazz needs to win with a 4 point advantage against the Denver Nuggets. For the Over/Under bet to win, the total score should be above 220.5 points.