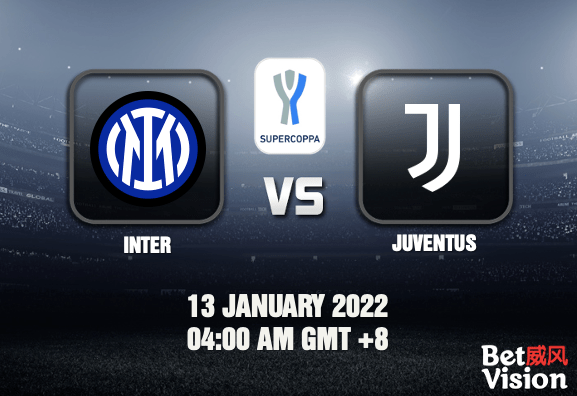 Inter v Juventus Supercoppa Prediction – It’s a Derby d’Italia matchup in the Supercoppa Italiana, as Inter Milan and Juventus battle it out for the trophy. When these two sides met last October in Serie A, the match ended in a 1-1 draw. Who will be the clear winner this time? Let’s take a look and read on for our winning tips below.

Inter are in-form coming into this match, with them having a four-game winning streak across all competitions. Juventus have been undefeated in the same number of games, winning thrice and drawing twice. Let’s take a deeper look at each team.

Inter Milan winning the Serie A last season qualified them for the Supercoppa this year. Despite losing Romelu Lukaku and manager Antonio Conte, they have remained dominant as ever. They are currently seated on top of the Serie A table just a point clear of rival AC Milan, and have progressed to the knockout stages of the UEFA Champions League. The Nerazzuri started their year on the right foot by beating Lazio 2-1 at the San Siro. Alessandro Bastoni got a touch on a corner by Lautaro Martinez and struck it home on 30 minutes, with Ciro Immobile equalising just five minutes later for a 1-1 score at halftime.  Milan Skriniar made the difference for Inter as he headed in Bastoni’s cross on 67 minutes. Manager Simone Inzaghi thinks that the upcoming Supercoppa clash will be “decided by a single episode,” so you can tell he and his men will give it their all of this piece of silverware.

Juventus made it to the Supercoppa by winning last season’s Coppa d’Italia, which at the time had Andrea Pirlo as manager and featured one Cristiano Ronaldo. Both have been gone since, and it has led to mixed results for the team, as they have struggled in Serie A (currently seated 6th) but have topped their UCL group. Their last league game was a thriller of sorts, as they beat Roma 3-4. Paulo Dybala immediately answered Tammy Abraham’s breakthrough by the Romans went ahead by two after the restart, thanks to Henrikh Mkhitaryan and Lorenzo Pellegrini. Then, from 70 minutes onwards, Manuel Locatelli, Dejan Kulusevski and Mattia De Sciglio combined for a 7-minute flurry of goals to complete the comeback at the Olimpico. Manager Massimiliano Allegri suffers a blow to his lineup coming into the Supercoppa, as dependable forward Federico Chiesa is out due to an ACL injury. However, he is determined to rally the Bianconeri to give their all in one of their best chances for silverware this season.

Regardless of both sides’ standing in the Serie A, this Derby d’Italia will depend on each team’s determination to win. Thus, this battle will be a tight one. In this case, we would have to give the slight edge to Inter, as they enjoy home advantage, and are quick on the attack. And while Juventus are likely to score, it will be the Nerazzurri lifting the Supercoppa. Let’s take a look at our predictions.