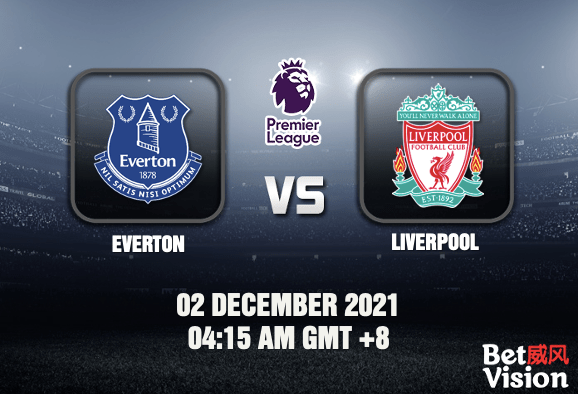 Everton v Liverpool Prediction (EPL) – The first Merseyside derby of the season takes place this week, as Everton hosts Liverpool in Matchweek 14 of the Premier League. In their last meeting, the Toffees won 0-2 at Anfield. Could the high-flying Reds get revenge at Goodison Park? Let’s take a look and read on for our winning tips below.

Everton have been without a win in its last five encounters, with one draw and four losses. Liverpool have been more successful, with four wins and just one loss across all competitions. Let’s take a look at their current season performance.

Everton are currently at a lowly 13th in the Premier League table. They picked up their 4th loss in 5 games when they bowed to Brentford 1-0. Ivan Toney successfully converted his penalty in the 25th minute, following Andros Townsend’s high challenge on Frank Onyeka. The Toffees then tried to level soon after, but Salomon Rondon’s effort was saved by Alvaro Fernandez. Jordan Pickford prevented a 2-0 deficit by saving Bryan Mbeumo’s shot, while Alex Iwobi and  Abdoulaye Doucoure had the best chances for the Merseysiders, who ultimately had to concede the game. Despite their losing streak, manager Rafael Benitez maintains that he could turn his side around. Will home advantage give the boys in blue the advantage against their red-hot crosstown rivals?

Liverpool are currently 3rd in the EPL table, two points clear of Chelsea and just one below Manchester City. Their last league game saw them obliterate Southampton 4-0 at Anfield. Diogo Jota’s first-half brace saw them go ahead of the Saints, with each goal being assisted by Andrew Robertson and Mohamed Salah respectively. Thiago Alcantara added in one more before the break as he effectively fired past Alex McCarthy. Virgil van Dijk completed the scoreline as he made a low volley on Trent Alexander-Arnold’s cross. Entering the Merseyside derby, manager Jurgen Klopp has claimed that the Toffees are a “very physical” side, with Van Dijk and Thiago suffering crucial injuries during the October 2020 edition. Could this motivate the Reds to give it their all this Thursday?

While the most recent home editions of the derby have been kind to Everton, there is a huge disparity between them and Liverpool with regards to their form this season. With Holgate out with a red card, and names like Dominic Calvert-Lewin and Yerry Mina still nursing injuries, the Toffees have a tall task ahead of them. The Reds are simply playing superb football at the moment, and are no doubt favourites to end a winless spell at Goodison Park this time around. On that note, let’s take a look at our prediction.

For this Premier League Everton v Liverpool Prediction to win, Liverpool need to win the match with a two goal lead. If they win by just one goal, the bettor would lose all of the stakes. For the Over/Under bet to win, the total goal count should be above 2.75 goals.