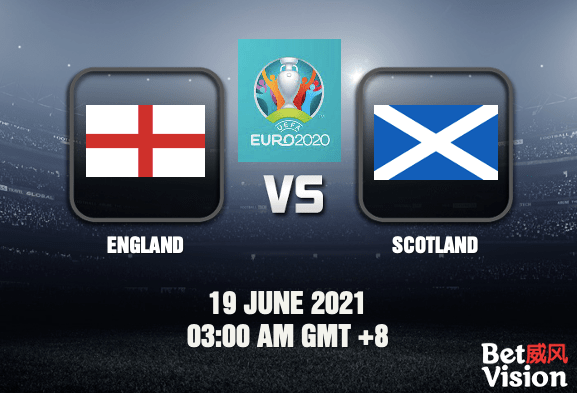 England v Scotland Prediction (EURO 2020) – Another edition of the Auld Enemy derby will be taking place in EURO 2020, as England hosts Scotland on Matchday 2. Will the English continue to dominate the rivalry? Or can the Scots pull off an upset?Have a quick look and read on for our winning tips below.

England’s win against Croatia in the opening match means that their winning streak continues in their last five games. Scotland, on the other hand, lost their opener to the Czech Republic, ending their undefeated streak in all competitions. Let’s take an in-depth look into both teams.

England are facing their oldest rivals with momentum on their side. They won their first-ever EURO opening game by beating Croatia 1-0. While the Vatreni had 51% of possession, the Three Lions were in control of the game from start to finish. The breakthrough came in the 57th minute when Kalvin Phillips passed to a running Raheem Sterling, who parted the Croat defence and shot from the centre of the box, the ball going past Livakovic. It was an important victory for head coach Gareth Southgate, but the England boss is now focusing on the “auld enemy”, whose latest matchup is sure to get attention from the UK’s two biggest home countries.

Scotland are relishing the chance to get one over their arch-enemies after losing in their opening fixture against the Czech Republic. The Tartan Army started out aggressive at the beginning, keeping the Lokomotiva on the back foot.  However, Patrik Shik turned things around with a goal at the 42nd minute, and another one nearly 10 minutes after the second half begun. Lyndon Dykes, Stuart Armstrong and Andrew Robertson all had chances to put Scotland on the board but all were in vain. Head coach Steve Clarke said that his side must learn lessons from the loss, and that they must not dwell on the defeat as they face their longtime rivals next.

While battles between the two sides have always had a heated atmosphere, England is far and away the superior team in this edition of the Auld Enemy match. It looks doubtful that the Scots could sneak in a goal due to the strong defensive lineup of the Three Lions. So barring any miracles, this one is England’s for the taking. Let’s take a look at the prediction. For this UEFA EURO 2020 Group  Match England v Scotland to win, England need to win the match with a two-goal lead. If they draw the match, the bettor would lose all of the stakes. For the Over/Under bet to win, the total goal count should be below 2.5 goals.