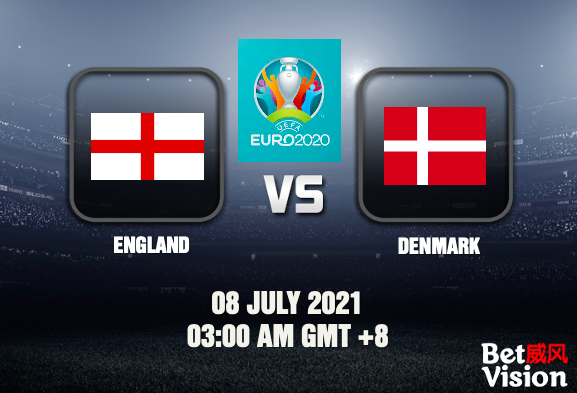 England v Denmark Prediction (EURO 2020) – England and Denmark will be battling it out in the second EURO 2020 semi-final, to be held at Wembley Stadium in London. Will the Three Lions finally make it to their first major tournament final in 55 years? Or will the Rød-Hvide score an upset and reach their first EURO final in 29 years? Read on for our winning tips below.

England has had impressive wins in the first two knockout rounds, keeping their undefeated streak in the tournament. Denmark, for their part, have been unstoppable even after losing their first two matches in the group stage. Let’s take an in-depth look into both teams’ journey to the semi-final.

England will try to reach the final round of the EUROs for the very first time, and also gain their first finals appearance in a major tournament since 1966. They easily beat Ukraine (4-0) during the quarter-final match at the Olimpico in Rome. Harry Kane scored just 7 minutes into the match when he footed in Luke Shaw’s marvelous cross, giving the Englishmen a 1-0 lead at halftime. By the beginning of the second half, the Three Lions were completely dominant, as Harry Maguire (46′) Kane (50′) and Jordan Henderson (63′) all scored via headers, while Jordan Pickford maintained a clean sheet against the Synio-Zhovti. Manager Gareth Southgate lauded his team’s “fabulous” win as they reached their second major semi-final in three years. However, he maintained their eye is still on the championship, which would give them their first major trophy since their lone World Cup title in 1966.

Denmark are also gunning for a chance to be in the EURO final after a long time, and win the title for the first time since 1992. The soundly defeated the Czech Republic in their quarter-final match at Baku Olympic Stadium. Thomas Delaney opened the scorelines with a header off of Stryger Larsen’s cross in the 5th minute. Kasper Dolberg doubled the lead 3 minutes before the halftime mark as he smashed in a cross from Joakim Maehle. Patrik Schick scored 4 minutes into the second half to cut the lead to one; however, the Rød-Hvide held on to the lead to make their first major tournament semi-final after 28 years. Manager Kasper Hjulmand described the victory as “magical”, and paid tribute to injured player Christian Eriksen, whose collapse in the opening match has elicited sympathy from all over the football world.

England have been totally dominant in the last two knockout stages, and they should continue the momentum heading into the semi-final against an equally-determined Danish side. The Danes, who are ranked 10th in the world, have also had impeccable teamwork as well as a talented squad. However, the better depth of the Three Lions, as well as the fact that they are playing on their own turf, will help them prevail over the Rød-Hvide, moving them one step closer to their first major trophy in this century. Let’s take a look at the prediction. For this UEFA EURO 2020 Semi-final Match England v Denmark Prediction to win, England need to win the match with a two-goal lead. If they draw the match, the bettor would lose all of the stakes. For the Over/Under bet to win, the total goal count should be above 2.25 goals.