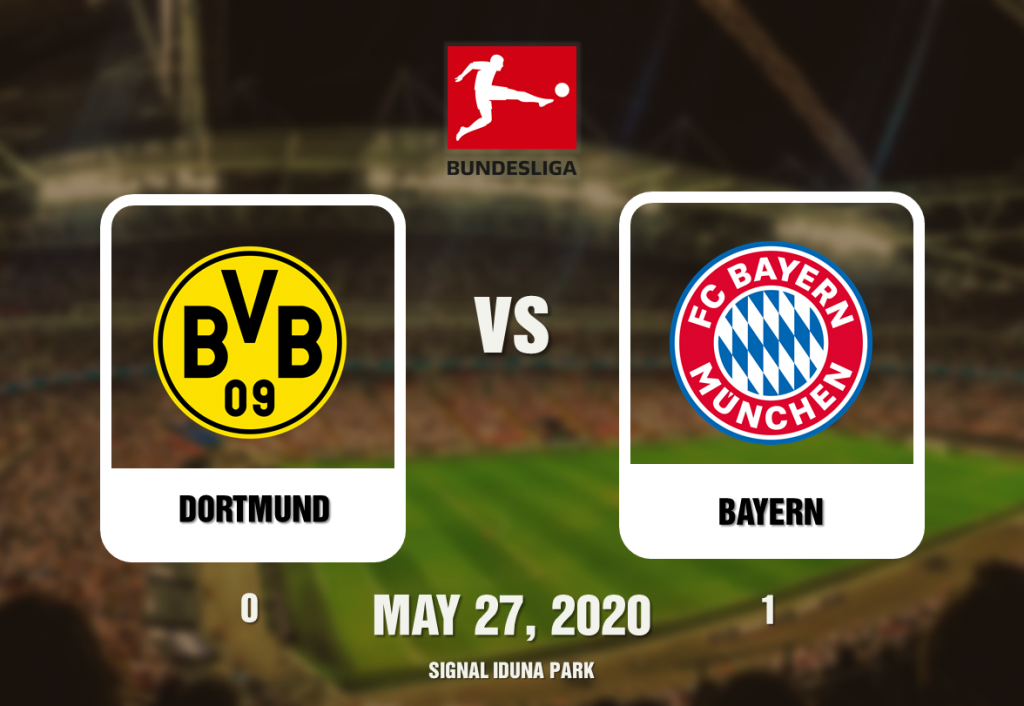 Bundesliga – May 5, 2020 – Dortmund went head to head against one of the best teams in all of Germany, Bayern! A german classic match in an empty stadium, the intense match that led to the victory of the visitors with a score of 0-1! This puts the leaders 7 points ahead of their rivals in the race for the best football club in Germany. Let’s check out the match highlights!

An early yellow card was dished out to Matt Hummels, Dortmund’s defender. It was a thrilling back and forth from this point on. Haaland was sent off due to an injury blow and was unable to get a goal in the match. Nearing the end of the first half, Joshua Kimmich’s 43-minute chip goal hit home for Bayern as it just slipped past Dortmund’s goalkeeper. Giving the visiting team the advantage.

As the second half started, Julian Brandt is out and substituted by Jadon Sancho. Tomas Delaney is out, replaced by Emre Can. Both teams stayed on the aggressive as they both gain yellow cards in succession.  Bayern is looking good by maintaining control of the match throughout. Dortmund had many great attempts at goal with Mo Dahoud and Robert Lewandowski, however, missing Haaland early in the meant fewer opportunities for the team to take in a goal to draw the match. After the rigorous back and forth between two teams the match ended with Bayern maintaining their one-goal lead, making it their 7th consecutive win the Bundesliga.

With Bundesliga as one of the major leagues around the world to resume it’s matched on empty stadiums, Bayern looking to end the season with a strong note and extend their win streak to their 8th consecutive championship win, they should maintain their performance in the last few matches of the season. The intensity for the race to the title is looking more competitive than ever.

Both teams showed top-class defending as they have held in long stretches of possession during the match. Bayern is 64 points with a 7 point lead against Dortmund in the table is looking good but should be taken care of by the team to win the championship. The team will be guaranteed the championship if they can win 4 of their last 6 in the league.

We are hoping for a win in Bayern’s next match against Fortuna. Do you think that the win streak will continue? Or will it be stopped by the visitors? Check out our preview for the match!

Follow or bookmark our page to get more information on matches, highlights, and tips! If you want To stay updated on these types of articles, be sure to follow us on Facebook, Twitter, Instagram, and Pinterest! To start playing, check out our banner below for more information on where is the best sports betting site in Singapore!