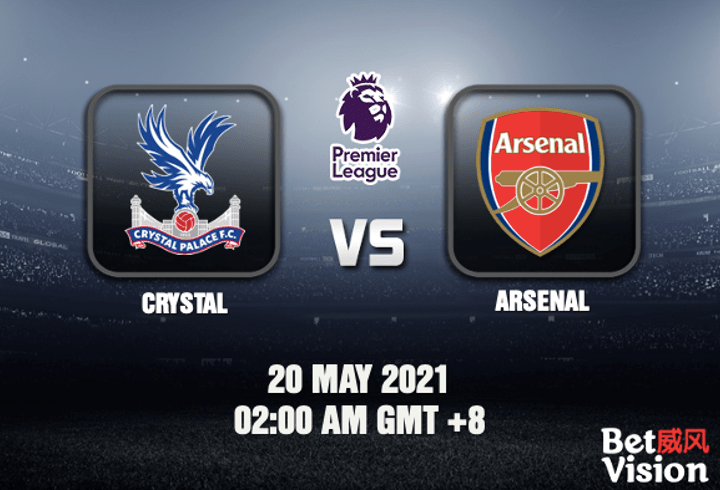 Crystal v Arsenal Match Prediction (EPL) – Crystal Palace is hosting the Gunners for this upcoming match week 36 in the Premier League. In their previous encounter, the match ended in a 0-0 draw at the Emirates Stadium. Will one club come out on top in this one? Let’s take a look and read on for our winning tips below.

Crystal Palace have had an inconsistent record over the last five outings, but are coming into this match after a win. Arsenal have the edge, however, with three consecutive league wins. Let’s take a look at their current season performance.

Crystal Palace are now seated 12th at the table in the Premier League. In their most recent outing, they secured a comeback win against Aston Villa at Selhurst Park. John McGinn opened the scoring early on in the 11th, but the Eagles levelled as Christian Benteke headed in a Tyrick Mitchell cross at 32′. Two minutes later, Anwar El Ghazi retook the lead with a goal at 34′, but Crystal Palace were saved at the 76th minute courtesy of Wilfried Zaha. A few minutes later, Mitchell chested in a deflected miss by Eberechi Eze at 84′. Manager Roy Hodgson praised the comeback win, singling out Mitchell for his stellar performance. Now they have to face an Arsenal side that is eager to get back into European competition next year.

Arsenal are currently at 9th in the table, still actively hunting a European slot for next season. They were able to pull off a surprise win over Chelsea (1-0) in their last outing. Emile Smith-Rowe was the hero for the Gunners, as he took advantage of an error by Jorginho at the 16th minute. He had his backpass kept off the goalline by Kepa Arrizabalaga, but Pierre-Emerick Aubemayang found the ball, allowing Smith-Rowe to finish. Mikel Arteta’s side held on to the lead for the rest of the match. The manager has lately face controversy over rumours that he was doubtful of his squad, which he flatly denied. Their next assignment against Crystal Palace shouldn’t be taken lightly, as they continue to try getting more wins to remain among the elite in Europe.

Despite a few missteps, Crystal Palace have been surprising the football world with solid performances. However, so too, have Arsenal. Having been unceremoniously booted from the UEFA Europa League tournament and criticism of their performance in the EPL, the Gunners are playing with a chip on their shoulder. This will no doubt show in their match with the Eagles, whom they will handily defeat. With that, let’s take a look at our predictions.

For this Premier League Crystal v Arsenal Match Prediction to win, Arsenal need to win with a two-goal lead. If they draw the match, the bettor loses all of the stakes. For the Over/Under bet to win, the total goal count should be above 2.5 goals.