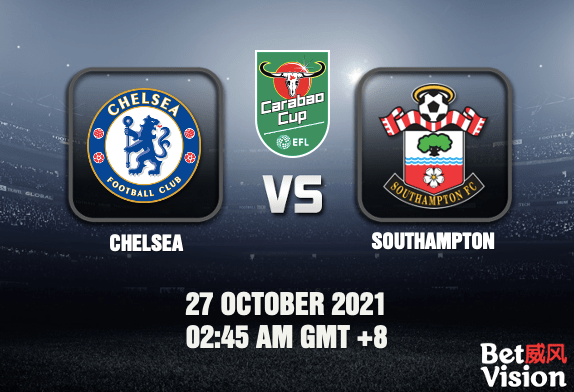 Chelsea v Southampton Prediction (EFL Cup) – Chelsea take on Southampton in a round of 16 elimination game for the Carabao Cup.  The Blues beat the Saints earlier this month on a score of 3-1. Will they repeat and eliminate their foes in this tournament as well? Let’s find out in our prediction.

Chelsea have been in excellent form in their latest matches in all competitions, winning four straight encounters leading up to this game. Southampton, participating in both the League Cup and the Premier League, have had three wins, one draw and one loss in their last fice encounters. Next up, we look at each side closely.

Chelsea have advanced to the round of 16 EFL Cup by beating Aston Villa 1(4)-1(3) at Stamford Bridge. Timo Werner and Cameron Archer each scored for their respective sides in full time. The Villans went on two miss two penalties in the shootout, while Chelsea made all but one to seal the win. The Blues are looking good as they picked up two blowout wins against Malmo in the UEFA Champions League (4-0) and Norwich City in the Premier League (7-0) before entering into the EFL Cup tie with Southampton. Manager Thomas Tuchel’s side, however, will miss the services of super-striker Romelu Lukaku and star midfielder Ngolo Kante due to injury. Will their dominance still shone through?

Southampton also sealed their EFL Cup round of 16 entry through a victory via penalty shootout over Sheffield United, 2(4)-2(2) at Bramall Lane. Enda Stevens gave the Blades a 1-0 lead before Ibrahima Diallo levelled 15 minutes later. Mohammed Salisu’s netter then seized the lead for the Saints in the second half, but Oli McBurnie equalised after 13 minutes. With Southampton first to kick in the shootout, only Armando Broja missed his penalty in the first five, as opposed to Sheff Utd splitting their four tries. They enter this match fresh from drawing with Burnley in the EPL, with Tino Livramento and Broja cancelling out Maxwel Cornet’s brace for the Clarets. Manager Ralph Hasenhüttl now have an uphill battle to climb among one of the best teams in Europe, and Broja being doubtful for the tie may pose a problem.

Despite the absence of key players like Lukaku, Kante, Timo Werner and Christian Pulisic, Chelsea’s possible lineup featuring Kai Havertz, Hakim Ziyech and Saul Niguez has the depth needed to be considered the overwhelming favourites in this contest. Southampton may consider Stuart Armstrong, Che Adams and former Blackburn Rovers player Adam Armstong to take the field, yet the Blues will be too much, and comfortably punch their ticket to the quarter-final round. Let’s look at the prediction.

For this EFL Carabao Cup Norwich v Liverpool Prediction to win, Liverpool need to win the match in full time with a two-goal lead. If they draw the match at full time, the bettor would lose all of the stakes. For the Over/Under bet to win, the total goal count should be above 2.5 goals.