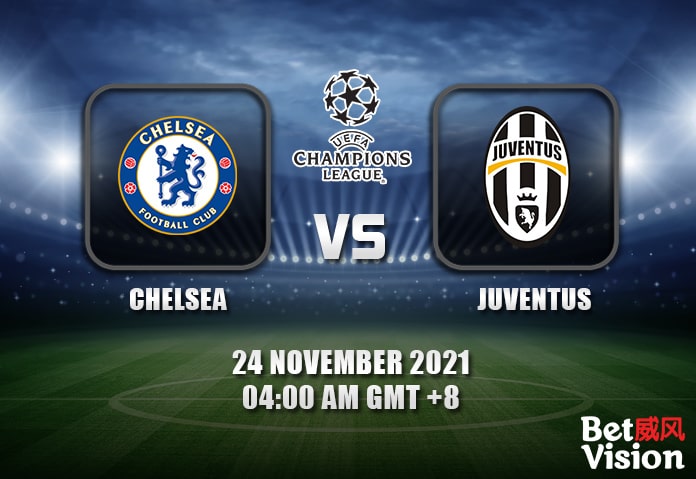 Chelsea v Juventus Prediction (UEFA Champions League) – Chelsea faces off again against Juventus on home soil in their upcoming UEFA Champions League match. In their last meeting, the Bianconeri narrowly won 1-0 in Turin. Could the Blues get revenge on home turf? Let’s take a look and read on for our winning tips below.

Juventus have met Chelsea six times in the UCL, and have won twice as the Blues. Interestingly, the Bianconeri have also scored twice as many goals as their opponent.

Chelsea have been undefeated in their five meetings, with four wins and one draw. Juventus, on the other hand, are on a three game winning streak after having two losses. Let’s now take a closer look at each side.

Chelsea are currently second in the Group H table with 9 points. Their lone loss in 4 games (W3) is by their upcoming opponents, and they have a goal difference of 5 (6 scored, 1 conceded). They handily beat Malmo  0-1 in their last UCL fixture at Eleda Stadium, with Hakim Ziyech scoring at the 56th minute. Despite being held to a 1-1 draw by relegation side Burnley in their Premier League match afterwards, they got back to their winning ways against Leicester City, where Antonio Rudiger, N’Golo Kante and Christian Pulisic all scored in a 3-0 win. Manager Thomas Tuchel will also be handed a boost coming into their upcoming match, as Jorginho, Romelu Lukaku and Timo Werner may feature after sustaining injuries. Could the Blues end Juventus’ streak now?

Juventus are currently on top of the Group H table with 12 points, 3 points clear of Chelsea. They have swept their first 4 games, and have a goal difference of 7 (9 scored, 2 conceded). Their last UCL game saw them dominating Zenit 4-2 in Turin. Paulo Dybala’s brace gave the Bianconeri the early lead despite Leonardo Bonucci’s own goal, while Federico Chiesa and Alvaro Morata’s netters came in the last two minutes of the game. They’ve also kept back to back clean sheets in the Serie A, first beating Fiorentina via Juan Cuadrado’s goal in stoppage time, and next defeating Lazio through Bonucci’s double. Manager Massimilliano Allegri however may be shorthanded due to injuries to key players prior to the match. Could Juve pull through and keep their win streak going?

With the current UCL champions and English league leaders looking dangerously on form, Chelsea are favoured to snap Juventus’ undefeated streak on home soil. Despite some key injuries, the Bianconeri can still give the Blues a hard time, denying their attackers easy goals with their formidable defence. In a nutshell, though, we think the Londoners are en route to victory in this one. On that note, let’s take a look at our prediction.

For this UEFA Champions League Chelsea v Juventus Prediction to win, Chelsea need to win the match with a one-goal lead. If they draw the match, the bettor would lose all of the stakes. For the Over/Under bet to win, the total goal count should be under 2.25 goals.