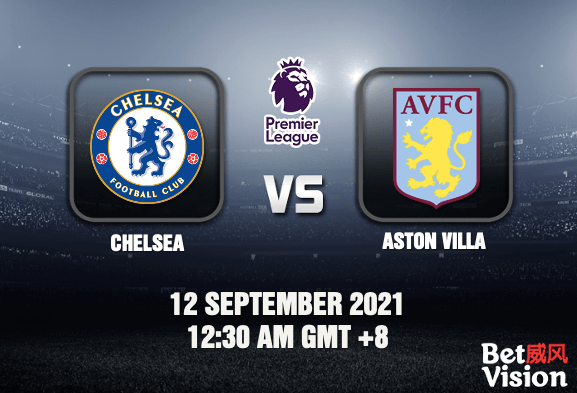 Chelsea v Aston Villa Match Prediction (EPL) – Chelsea takes on the Villans for this upcoming match week 4 in the Premier League. In their previous encounter last May in Birmingham, Aston Villa prevailed 2-1. Could the current European champions get their revenge? Let’s take a look and read on for our winning tips below.

Chelsea have been undefeated so far this season, coming off of a draw going into this match. Aston Villa, on the other hand, have had inconsistent form over the three games. Let’s take a look at their current season performance.

Chelsea is now seated 4th at the table in the Premier League. They drew their most recent encounter against Liverpool, 1-1, when they visited Anfield. Kai Havertz headed in Reece James’ corner on 22 minutes to give the Blues the lead. However, during first half stoppage, James was given a red card when he challenged Sadio Mane’s close-range shot. Mohamed Salah converted the resulting penalty to level the score going into half time. Despite a one-man disadvantage, Chelsea were able to prevent the Reds from capitalising and taking the lead in the league table. Manager Thomas Tuchel hailed his team’s performance, most notably defender Andreas Christensen who stepped up after James was sent off. They will face another challenge in the next match with Villa, however, with James, Havertz, Ngolo Kante and Romelu Lukaku being unavailable.

Aston Villa ended the first three games of the season just outside of the top half of the table. They picked up a 1-1 draw against newly-promoted Brentford in their last outing at Villa Park. Ivan Toney opened the scoring early for the Bees in the 7th minute. It didn’t take long for the Villans to equalise, as Danny Ings completed the pass to Emiliano Buendia, who in turn scored just outside the penalty area. Ollie Watkins almost gave the home side the win twice in stoppage time, but David Raya was there to make the save. Manager Dean Smith was still satisfied with earning a point after the draw. However, he will face a problem, as Argentinians Buendia and Emiliano Martinez will be unavailable the next match due to failure to comply with COVID-19 protocols during their World Cup qualifying matches.

Both Chelsea and Aston Villa will be shorthanded for the match, but the Blues’ available pool of talent will be too much for the Brummies to handle. The Blues also enjoy a home crowd advantage, who will surely be pulling for them to achieve the 600-win mark. With that, let’s have a look at our prediction.

For this Premier League Chelsea v Aston Villa Match Prediction to win, Chelsea needs to win the match with a two-goal lead. If they only win by one goal, the bettor would lose all of the stakes. For the Over/Under bet to win, the total goal count should be above 2.75 goals.