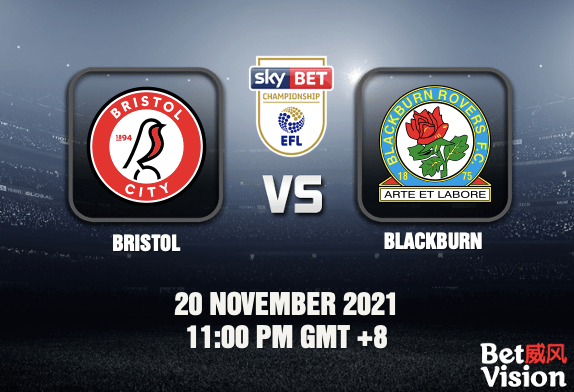 Bristol v Blackburn Prediction (EFL Championship) – Blackburn Rovers, official partner of BetVision, head over to Ashton Gate this weekend to take on Bristol City in the League Championship. Their last match in March this year ended in a scoreless draw. Will there be a clear winner this time? Let’s take a closer look and read on for our winning tips below!

Bristol have been dismal in their last five games, having four losses and only one win. Blackburn on the other hand have been mostly in good form in the same number of contests, having three wins and two losses. Let’s take a look at their current season performance.

Bristol City are now seated 19th at the table in the Championship. They suffered a tough break when they lost to 10-man Coventry City, 3-2. Ian Maatsen of the Sky Blues was sent off before halftime, and the Robins were awarded a penalty, which Chris Martin successfully converted. Matt Godden then levelled six minutes after resumption of play, but Andreas Weimann responded in the 68th minute to retake the lead. Six minutes later, Callum O’Hare equalised again, and Godden delivered the heartbreaker two minutes after regulation to the delight of the home crowd. Manager Nigel Pearson, who missed the Coventry match due to a Covid-related illness, may be unlikely to take the helm again leaving assistant Curtis Fleming in charge once more.

Blackburn Rovers are now at 7th in the league table, seven points clear of Bristol. They scored a massive victory as they came from behind to beat Sheffield United 3-1 in their last meeting at Ewood Park. The Blades were in the driver’s seat early on with Rhian Brewster’s 2nd minute netter. However, the Blue and Whites turned the tide as Red Khadra levelled on 37 minutes. Talisman Ben Brereton Diaz then helped Rovers take the lead in the 59th minute, and Ian Poveda doubled their advantage with a goal 11 minutes after. Manager Tony Mowbray credited the 17,000+ fans wholehearted support, as it helped the team get back to their winning ways. They hope to continue the momentum as they face the Robins next.

Despite Bristol’s grim record under Pearson, the team will suffer without a proper manager at the helm. They will be counting on home support as they try put an end to their woes this season. It’s highly unlikely that get that opportunity with Blackburn, however, as the in-form Rovers lead the Robins in all statistics. Brereton Diaz, who is also fresh from a great showing on the Chile national team, will also be causing trouble for the undermanned home side. Thus, this will end in. convincing win for the Blue and Whites. Let’s now take a look at our predictions.

For this EFL Championship Bristol v Blackburn Prediction to win, Blackburn need to win the match with a one-goal lead. For the Over/Under bet to win, the total goal count should be above 2.5 goals.