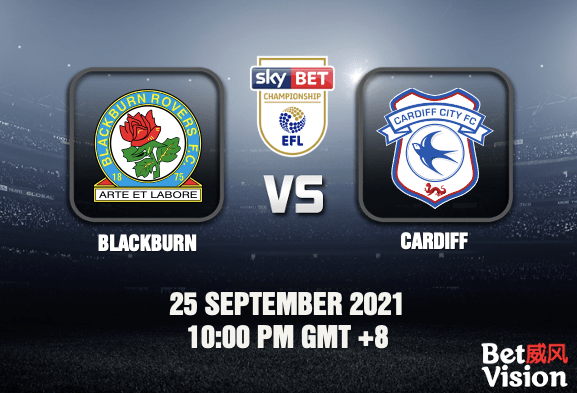 Blackburn v Cardiff Prediction (EFL Championship) – Blackburn Rovers, official partner of BetVision, head back home to take on Cardiff City in their upcoming EFL Championship match. Their last match in April ended in a 2-2 draw. Could one team prevail this time? Let’s take a closer look and read on for our winning tips below!

Blackburn are coming into this game with a recent record of 1 win, 3 draws and 1 loss. Cardiff, on the other hand, have lost thrice and won twice in their latest matches. Let’s take a look at their current season performance.

Blackburn Rovers are now seated 6th at the table in the Championship. They drew their most recent encounter against Barnsley when they visited Oakwell. Early on, Thomas Kaminski made a huge save on Clarke Oduor’s running attempt towards the goal. On the other end, Ben Brereton’s attempt was kept out by Brad Collins. Kaminski then saved a header by Michal Helik before the first half wrapped up. In the second half, he parried away an attempt by Dominik Frieser, whilst Brereton tried for another strike but Collins went out to meet him. The Tykes saw three more close attempts go wide, and Collins caught yet another strike from Leighton Clarkson. Nevertheless, manager Tony Mowbray was happy to take the point from a hard-fought match, as they next return home hoping for a better showing against the Bluebirds.

Cardiff City are currently at 10th in the league table, four places below Blackburn. They narrowly lost to Bournemouth, 0-1, during their last match at Cardiff City Stadium. The scoreless first half saw three yellow cards already issued, two of which were for the Bluebirds’ Mark Harris and Curtis Nelson. The visiting Cherries made the breakthrough as Phillip Billing scored on 54 minutes with an assist from Adam Smith. Manager Neil Harris then made three substitutions in 10 minutes, but were still unable to get the equaliser. Leandro Bacuna then picked up the last yellow card for Cardiff before ending the game on a painful loss. They hope to redeem themselves against Blackburn, whom they’ve matched up really well in recent times, as they head back on the road.

Blackburn will have their hands full with Cardiff, since 7 of their last 10 meetings ended in draws. In addition, both sides have scored the same number of goals so far this season. However, Ewood Park has been lucky for the Riversiders so far, and we expect that momentum to carry on even with an unpredictable side like the Bluebirds. We predict Rovers to finally get the victory after so many tries. Let’s take a look at our predictions.

For this EFL Championship Blackburn v Cardiff Prediction to win, Blackburn need to win the match with a one-goal lead. If they draw the match, the bettor would lose all of the stakes. For the Over/Under bet to win, the total goal count should be above 2.5 goals.