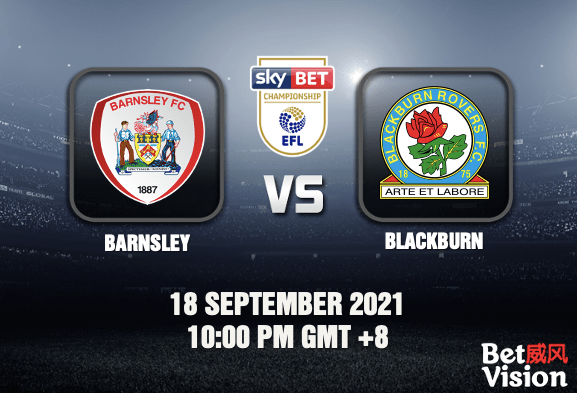 Barnsley v Blackburn Prediction (EFL Championship) – Blackburn Rovers, official partner of BetVision, visit Oakwell Stadium this weekend for an away match against Barnsley in the EFL Championship. Could the Riversiders make it two victories in a row? Let’s take a closer look and read on for our winning tips below!

Barnsley are without a win in their five last matches, having three draws and two losses. Blackburn have fared better, with two wins, two draws and a loss. Let’s take a look at their current season performance.

Barnsley are currently seated 17th at the table in the Championship. They drew their most recent encounter against Stoke City when they visited Britannia Stadium. Sam Surridge put the hosts ahead in the 17th minute, but the Tykes levelled 21 minutes later with Cauley Woodrow’s netter. Both sides failed to find the back of the net of the second half, with each settling for 1 point in the table. Manager Markus Schopp was pleased with the fight his team showed, even though the match got ugly near the end when some of Stoke’s coaching staff went into Barnsley technical area and were sent off as a result. They now head back home to host higher-placed Rovers in the next fixture.

Blackburn Rovers are now 8th in the league table, nine places ahead of Barnsley. They scored a big win against Hull City in their last outing at Ewood Park. After an uneventful first half, Spanish defender Daniel Ayala headed in the breakthrough goal in the 61st minute, off of a corner from Joe Rothwell. It took only four minutes for the Blue and Whites to double the lead, as Chilean-English striker Ben Brereton Diaz finished with his fourth goal of the season off of midfielder Lewis Travis’ assist. Manager Tony Mowbray praised his squad after the much-needed win, which takes Rovers back up the standings. They now hit the road again to take on a struggling Barnsley side, who are itching to find their rhythm.

Barnsley will enjoy home advantage at this match, and also have a healthier squad. However, Blackburn have had a better recent record, whilst the Potters are still struggling to get a win. After the showing against Hull, the Riversiders have momentum on their side, which will carry them to another win this weekend. With that, let’s take a look at our predictions.

For this EFL Championship Barnsley v Blackburn Prediction to win, Blackburn need to win the match with a one-goal lead. If they draw the match, the bettor would lose all of the stakes. For the Over/Under bet to win, the total goal count should be above 2.25 goals.