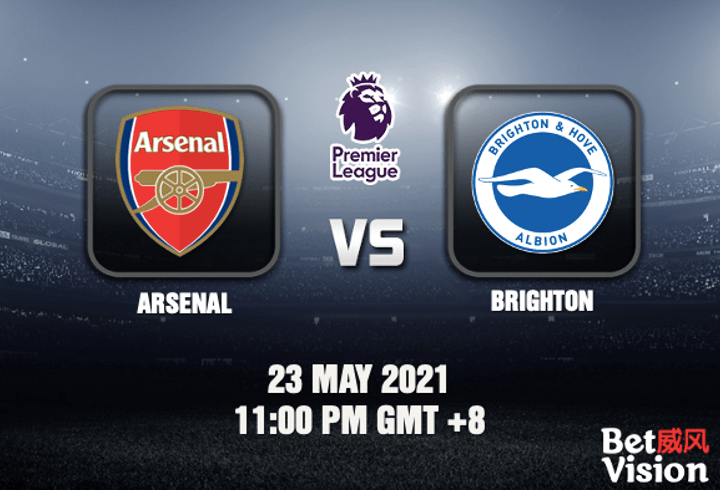 Arsenal v Brighton Prediction (EPL) – Arsenal will be hosting Brighton & Hove Albion on the last EPL game day of the season. The Gunners won 1-0 in the reverse fixture. Can they complete their first league double over the Seagulls since the 1980-81 season? Let’s take a look and read on for our winning tips below.

Arsenal is coming off of four straight victories heading into this match. Brighton, meanwhile, have had inconsistent form over their last five games, but are going into the match following a win. Let’s take a look at their current season performance.

Arsenal are currently at 9th in the table, one point away from the top 7. They scored a big win in their most recent encounter against Crystal Palace, 3-1. Nicholas Pepe volleyed in Kieran Tierney’s cross 35 minutes into the match to give the Gunners the lead. In the second half, Christian Benteke levelled with a goal. Arsenal retook the lead in stoppage time with Gabriel Martinelli bundling in Martin Odegaard’s cross, and Pepe sealed the victory soon after with a quick run and finish. Manager Mikel Arteta was delighted, and praised Pepe’s standout game. They now need to win convincingly over the Seagulls in the next match, and hope that Tottenham and Everton for a ticket to the inaugural Europa Conference League.

Brighton & Hove Albion are at 16th in the table and guaranteed a return to the league next season after some relegation scares. In their last outing, they scored an emphatic victory over newly-crowned champs Manchester City (3-2). After Gundogan put Man City ahead two minutes in, they suffered a setback when Joao Cancelo got a red card 8 minutes later. After the half, Phil Foden added another point for City. However, Leandro Trossard answered with a powerful strike two minutes later. Adam Webster then levelled the score with a header at 72 minutes, and Dan Burn completed the turnaround four minutes later after a follow-up effort to a saved shot. Manager Graham Potter got into a heated argument afterwards with City boss Pep Guardiola, but later apologised, and he and his side are now focused on ending their campaign with a win over the visiting Gunners.

With Arsenal on a mission to get European football next season, their squad will be asserting their superiority over their lowly visitors. Don’t count out a surprise Brighton performance, as they have been capable of scoring upsets in the past. However, we can see the Gunners prevailing here, and ending their EPL campaign on a high note. Let’s take a look at our predictions.

For this Premier League Arsenal v Brighton Prediction to win, Arsenal need to win with a two-goal lead. If they draw the match, the bettor would lose all of the stakes. For the Over/Under bet to win, the total goal count should be above 2.75 goals.