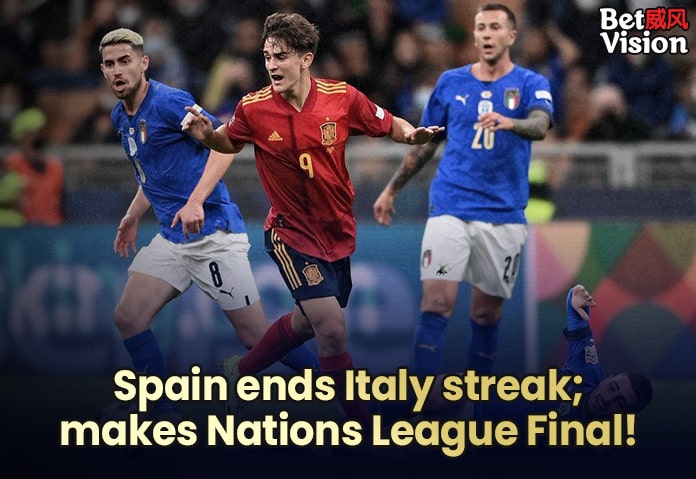 Spain ends Italy streak (Sports News) –The Italian football team’s world record setting streak comes to end at 37, as Spain beat them 2-1 in the semi-final of the UEFA Nations League. Ferran Torres scored both goals for Spain, who dominated the game and gained even more advantage after Italy’s Leonardo Bonucci was sent off before half-time.

With the win, Spain was able to exact revenge on Italy, who eliminated them at the same exact stage in the UEFA EURO 2020 at Wembley Stadium. The Azzurri went on to lift the European Championship trophy.

Spanish coach Luis Enrique made critical decisions as early as the lineup announcement. For one, he decided to play Ferran Torres up front despite not being a natural striker. He also gave Gavi Páez the distinction of becoming Spain’s youngest full international. Lastly, he assigned Marcos Alonso to the left-back position in a strategic move.

Early in the first half, the Roberto Mancini-managed Italians were in trouble. Keeper and former AC Milan man Gianluigi Donnarumma was playing again for the first time in his stadium and received boos by AC Milan fans. La Roja then got into action at the 17th minute mark, as Ferran Torres volleyed in Mikel Oyarzabal’s curling cross from the left.

The Spaniards were on the brink of increasing the lead, as Donnarumma fumbled Marco Alonso’s shot, prompting the ball to escape his hands and hit the left post. Leonardo Bonucci came in the nick of time to clear the rebound off the line.

The Italians had a chance to equalise on the 35th minute when Federico Bernardeschi’s shot was deflected to the post by Unai Simon, when afterwards Lorenzo Insigne made Emerson’s cross go wide.

La Roja got a lucky break as Bonucci was sent off on 42 minutes after a second yellow card when his elbow caught Sergio Busquets in a scramble for a header. A few minutes later, Torres headed Oyarzabal’s cross from the left back, directing the ball into the bottom left corner for a 2-0 lead.

Giorgio Chiellini went on at half time to add strength to the 10-man Azzurri. Federico Chiesa then went on an amazing run but fell short with his shot hitting the right post. Oyarzabal nearly tripled the lead on 63 minutes, his header from Yeremy Pino going wide of the post. Alonso also made an attempt for La Roja but his low shot found its way into Donnarumma.

The Azzurri had one last gasp with 7 minutes left, as Chiesa sprinted to the penalty area to draw Simón, and rolled the boll across to Lorenzo Pellegrini for a tap-in. But it was a matter of minutes before time elapsed on their UNL campaign, and on their record for the ages.

🤔 Who impressed you at Stadio San Siro ?#NationsLeague

Spain Ends Italy Streak - The End of the Run

The defeat brings to an end a record-breaking winning streak by the Italians under the leadership of Mancini. Apart from this, Italy were also handed their first competitive defeat on home soil since September 1999. After failing to qualify for the FIFA World Cup in 2018, the Azzurri hired Mancini and set off on a dominant path which culminated in winning EURO 2020. This was the first time they won the tournament since 1968, and their first major trophy since lifting the World Cup in 2006.

Spain will now move on to face the winner of the other UNL semi-final between Belgium and France later at 2:45 AM (SG Time), while Italy meets the loser of the match to set up a battle for third in the competition.