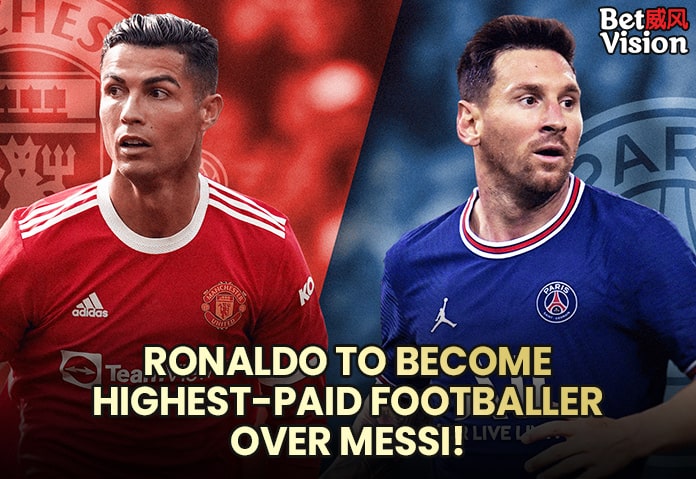 Ronaldo to become highest-paid footballer (Sports News) – Cristiano Ronaldo is set to overtake rival Lionel Messi as the highest-paid football player in the world. This is according to Forbes magazine, who had just released a list of their projected top-earners in the sport for the 2021/22 season.

The magazine has determined the list through speaking to clubs, sponsors, player agents and financial experts. They have also estimated that the top 10 earners will get pretax earnings of $585 million this season, up from last year’s $570 million.

Upon his return to Manchester United after three years with Juventus, Ronaldo is set to earn $125 million before taxes. $70 million will also be coming from salary and bonuses alone.

Messi, who also switched clubs from Barcelona to Paris Saint-Germain this summer, is projected to earn $110 million in the 2021-22 season. He also will be earning more than Ronaldo in terms of salary at $75 million.

However, Ronaldo, who is the most popular athlete on social media, with 500 million followers on all platforms, has brought in $55 million in endorsements. In comparison, Messi is projected to bring in $35 million worth of endorsements.

Messi’s teammates Neymar and Kylian Mbappe are at third and fourth on the table. They are projected to earn $95 million and $43 million, respectively. Neymar, in particular is expected to earn more than Ronaldo for on-field earnings with $75 million. However, he falls far behind on endorsements, where he stands to earn $20 million.

Mohamed Salah rounds out the top five. The Egyptian Liverpool star is forecast to earn $41 million this season.

Here is the complete list of the world’s highest-paid football players, with their expected earnings for 2021/22 (in US dollars):

Ronaldo was also absent ahead of the Carabao Cup clash with West Ham United. Manager Ole Gunnar Solksjaer decided to rest his talisman, who has scored four goals for Man Utd upon his return, to keep him and other key players fresh for the Premier League and UEFA Champions League games.

“We decided more or less before Sunday [to make changes],” Solksjaer told Sky Sports: We need more players to get match fit. Cristiano Ronaldo has come in and made a difference already, he wants to play as much as possible but I don’t think it is possible.

“If you are going to be successful at the end, you need the whole squad and minutes to be shared out. A risk making so many changes but we have played some games behind closed doors and hopefully we find the rhythm.”

Unfortunately, the experiment failed, as Man Utd fell to West Ham 0-1 at Old Trafford. This is the Red Devils’ first elimination from a competition in the 2021/22 season.

Messi, on the other hand, had missed Paris Saint-Germain’s recent clash with Metis in Ligue 1 due to an injury to his left knee. He was substituted in the second half of Sunday’s league win over Lyon. The Argentinian underwent an MRI scan that showed bruising to the bone, with a follow-up examination in 48 hours.

Because of this, it is unclear whether he could take part in the upcoming weekend fixture with Montpellier and their UEFA Champions League clash next week with Manchester City.

Messi made his PSG debut in an away match against Reims when he was subbed in the 66th minute for Neymar. His “Argentina clause” made him miss the fixture against Clermont Foot, as it happened during the week of the World Cup qualifiers. He has yet to score a goal for the club since his transfer last summer.