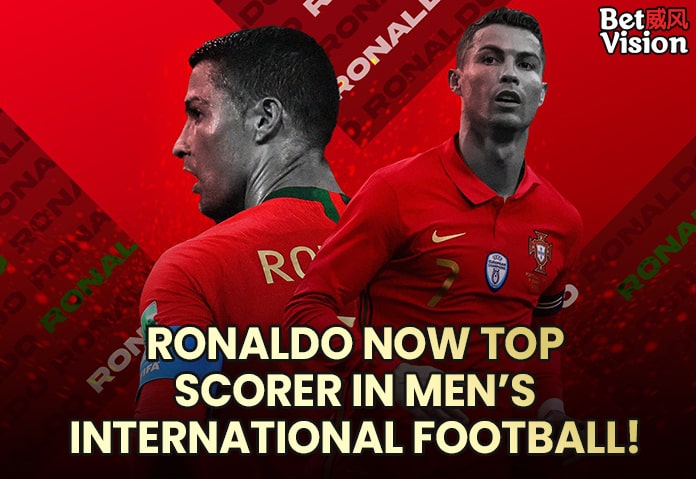 Ronaldo now top scorer in men’s international football (Sports News) –It’s official: Cristiano Ronaldo is now the sole all-time top goalscorer in international men’s football. He secured the record as Portugal came from behind to beat the Republic of Ireland, 2-1, in their World Cup qualifying match. He scored both goals for the Seleçao, both of which were headers and took place in the dying minutes of the match.

This feat comes barely a week after Ronaldo left Juventus to begin a second spell for Manchester United. A sizable and socially-distanced home crowd was at Estadio Algarve to witness their hometown hero become the top goalscorer for men’s international football.

Ronaldo earlier tied the all-time record of 109 goals, held by Iran’s Ali Daei, when he played in the European Championship held last April-May. He, however, was unable to break the record when Belgium eliminated Portugal in the tournament’s round of 16.

He had the opportunity to claim the record early in the game when Portugal was awarded a penalty, as Ireland’s Jeff Hendricks tripped Bruno Fernandes in the box. However, 19-year old keeper Gavin Bazunu made a huge save on the Portuguese’s shot. Things also began to look bleak for the Selecao when John Egan headed in a corner in the 45th minute, giving the Boys in Green a 1-0 lead going into half time.

Ireland continued to frustrate Portugal, as efforts from Fernandes, Diogo Jota and Bernardo Silva failed to connect. Ronaldo himself got close with a free-kick that was also saved by Bazunu.  But then, at the 89th minute, the 36-year old talisman headed in a cross by Gonçalo Guedes to tie the game and score his 110th international goal, breaking the international record. Not satisfied, Ronaldo would head in Joao Mario’s corner kick in the last minute of stoppage time to complete the comeback and stun the valiant Ireland side.

To celebrate goal number 111, Ronaldo took off the shirt and skipped over to the jubilant Portuguese crowd. The talisman got a yellow card as a result, which mean that he would skip the next qualifying match against Azerbaijan. However, he remained unfazed and basked in the glory of the moment.

There is still a sizable margin separating Ronaldo from Canadian female international and 2020 Olympic gold medalist Christine Sinclair, who has scored 187 international goals in 300 games. His biggest rival, Lionel Messi, is way behind him in the list with 76 goals in 151 appearances.

“I can’t even express myself in words!” said Ronaldo in his Instagram post about the historic feat. “I’m thrilled with an overwhelming sensation. Let’s go Portugal! Let’s go!

“First of all, because every time I represent my country is a special moment, for knowing that I’m defending Portugal and showing to the world what Portuguese people are made of. Secondly, because national teams’ competitions have always had a strong impact in me as I was growing up, watching my idols playing for their flags every other summer in Euros and in World Cups.

“But finally and above all, because scoring 111 goals for Portugal means 111 moments like we experienced today in Algarve, moments of worldwide union and happiness for millions and millions of Portuguese citizens all around the globe. For them, every sacrifice is worth it.”

Ronaldo’s recent performance has also given Manchester United something to be excited about. Despite leaving the English club for Real Madrid in 2009, he still was adored by supporters, who had always hoped for his return. The five-time Ballon d’Or winner is expected to make his second debut appearance for the Red Devils on the 11th of September against Newcastle United.