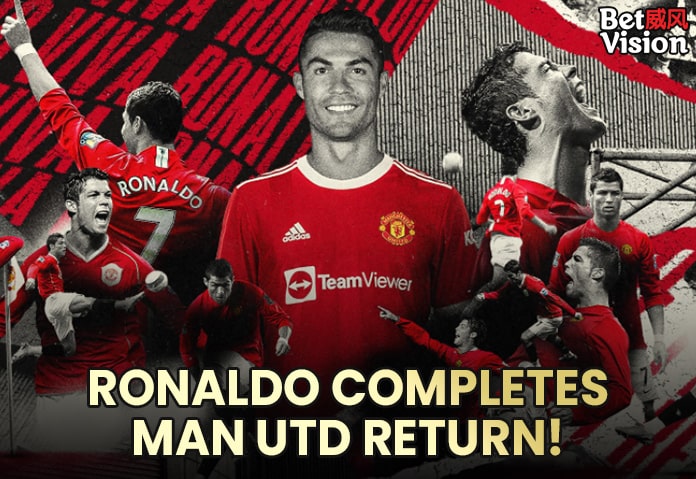 Ronaldo completes Man Utd return (Sports News) – After playing for Juventus for three years, and debunking rumours of his transfer to either Real Madrid or Paris Saint-Germain, Cristiano Ronaldo finally begins a new chapter as he is officially back with Manchester United. It is a sentimental comeback, as this is the club where he rose to worldwide fame.

There were initial speculations that Ronaldo was unhappy with Juventus, and he missed their first games. There was also initial talks that linked him to Manchester City. It certainly looked that he was on his way to the bitter rivals of his former club, and this naturally drew resentment from Man Utd supporter. However, talks between Juve and Man City failed to prosper, even as the Portuguese star said his goodbyes to his Bianconeri teammates and boarded a plane from Turin, Italy to England.

At that moment, Manchester United showed their hand in the negotiations. Former United manager Sir Alex Ferguson and Rio Ferdinand then began contacting the superstar and plotted terms by which Ronaldo would return. Man Utd chief executive Ed Woodward was also involved in the talks. Finally, the Portugal international player was convinced to return to the club where it all started for him.

Ferguson, in particular, is someone Ronaldo holds in high regard. Many have gone to say that he considers his former coach as his “football father”. Sir Alex plucked Ronaldo from Sporting CP in 2003 when he was still a teenager, and helped put him on the world stage, ushering in the birth of a global phenomenon. He would then go on to win three Premier League titles as well as the UEFA Champions League in 2008 – which is also the last time the Mancunian club won the trophy. He would then break the hearts of United supporters in 2009 when he went to Real Madrid for a record transfer fee of 80 million GBP.

However, the Red Devils faithful still cheered for Ronaldo, even as he played on opposing teams in Old Trafford matches. This feeling is reciprocated by the phenom himself, in his official statement announcing his return to the club.

“Manchester United is a club that has always had a special place in my heart,” says Ronaldo. “I cannot wait to play at Old Trafford in front of a full stadium and see all the fans again. I’m looking forward to it and I hope we have a very successful season ahead”.

The showman returns to his Theatre of Dreams.

By signing with Man Utd, the five-time Ballon d’Or winner is taking a pay cut.  He reported was secured for an initial 15 million Euros.  He is also anxious about making more history for the club the second time around.

Ronaldo completed his medical while on international duty for Portugal for their upcoming qualifier match with Ireland. Manchester United has also recently unveiled photos of the Portuguese superstar wearing the new uniform, to the delight of their adoring fanbase.

The move should also shake up betting odds on Manchester United and Premier League as a whole, as well as Juventus and their Serie A and UEFA Champions League chances.

Will the 36-year old’s second spell at Old Trafford be a mere sentimental signing and show of fan service? Or could one of the greatest footballers make a difference for the Red Devils and end their long silverware drought? We shall see in the coming days.