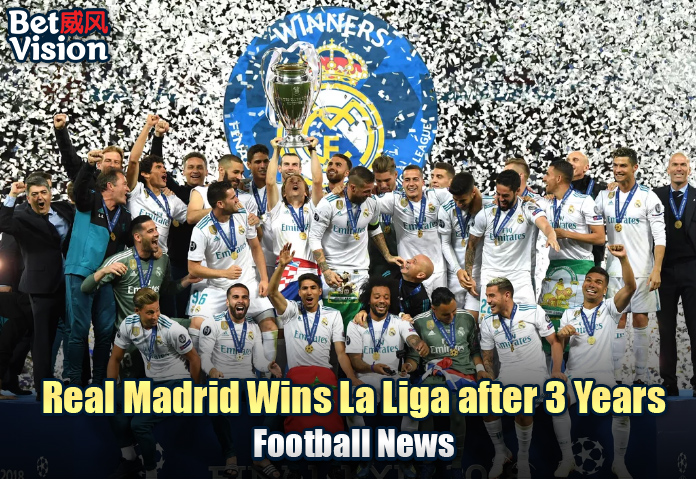 Real Madrid Wins La Liga after 3 Years! – Zinedine Zidane is more than happy winning his first La Liga title for Real Madrid in their match against Villareal! It was an emphatic 2-1 finish for the Los Blancos while gaining their first title in 3 years!

It was behind closed doors that Real Madrid has won its 34th title! It was one of the most Un-Real Madrid wins among all the victories of the hailed Spanish club. It’s the club’s first title win since 2017! As they have pulled a victory over Villarreal, Zidane’s squad was ready to pull in their celebratory shirts at the club’s training complex!

The club was able to do good in their last match against Villarreal with an emphatic 2-1 finish! Karim Benzema converted 2 goals giving the team its sweet championship over La Liga! The opponents were able to snatch a single goal but was not enough to stop the celebration of the Vikings in this huge victory!

The club was able to claim victory over a run of ten matches since the restart in June! The secret to Zidane’s squad success is his defensive prowess throughout the season. This turnaround finish is something to be proud of as they were declared champions with a 7 point advantage over Barcelona! One of the key players in this victory is Karim Benzema who is second Lionel Messi in scoring goals this La Liga season! Since Cristiano Ronaldo’s departure, the team has been scrounging over on where to get their winning formula, but it seems like Zidane has figured out the key to their success!

Real Madrid Wins La Liga after 3 Years - The Next Step

For Real Madrid to win this title means that the dominance of Barca is done in Spain! Despite losing one of their key players, Zidane showed that the club is capable of winning the title! It looks like he is happier in winning this league compared to the Champions League! Here is his final statement on winning the Title courtesy of La Liga: .

“Today is one of the best days for me as a professional and after everything that happened, the three-month break, it’s fantastic what’s been achieved, It’s strange for everyone, we can’t control the situation. We would have loved to be with the supporters, hopefully, that can happen further down the line but for a question of health, it can’t. But I’m sure the supporters are happily celebrating at home.”

With this victory, The club is now looking forward in creating an opportunity to trump over Manchester City in the Champions League! They are surely more than confident and would add to their trophy victories for the season!

BetVision congratulates Real Madrid in this outstanding victory! May you proper more on the years to come! If you want to stay updated on the latest in sports betting news, bookmark our page or follow us Facebook, Twitter, Instagram, and Pinterest! If you want to get started on playing, check out our banner below! or register using the button above!