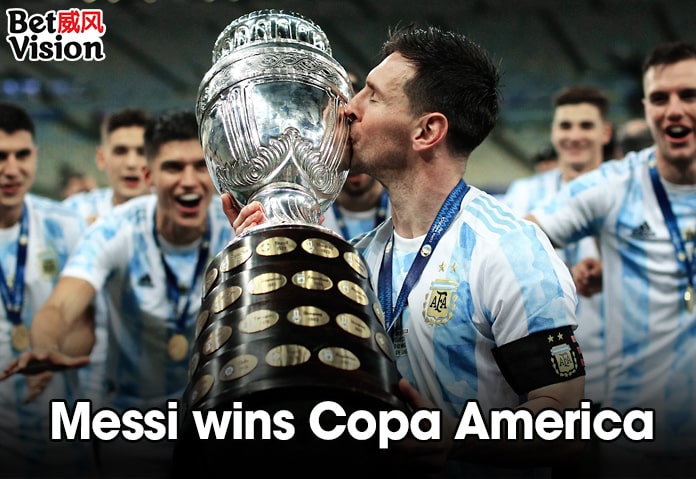 Messi wins Copa America (Sports News) – Lionel Messi finally snatched his biggest victory yet as he and Argentina finally won the CONMEBOL Copa America. They did this by beating Brazil (1-0) in the final, held at the Maracana in Rio de Janeiro last 11 July 2021 (SG Time). With the win, the 36-year old Messi has won his first-ever senior international trophy – a prize that has eluded him even after winning multiple Ballon d’Ors, and several domestic and international trophies with Spanish club FC Barcelona.

It was a dream come true for Messi, who had several runner-up finishes in the Copa America tournament, and lost in the 2014 World Cup Final to Germany. Although Argentina has won the tournament the most times with 14 cups (it was previously called the South American Championship), they hadn’t won it since 1993.

Argentina were facing a deeply talented Brazil, which was led by his former Barcelona teammate Neymar among others, and were the favourites to life the trophy this year. However, the Albiceleste were in control of the whole game, and they made the breakthrough in the 22nd Veteran player Angel di Maria beat the off side trap and went to the right flank to receive a long floater from Rodrigo de Paul in the mid-field, and chipped the ball into the net over Ederson.

The Selecao tried for an equaliser for the remainder of the match, but never got the opportunity. Richarlison was able to net in the ball, but he was ruled offside. Messi himself fell short of scoring an on-target goal as Ederson successfully saved his effort, but he still was able to bag the Best Player and Top Scorer award of the tournament, scoring the most number of goals (13). He also provided the most assists in the tournament (5), breaking the tournament’s record for assists in a single edition.

Once the Albiceleste beat their arch-rivals in their own fabled stadium, Messi fell to his knees and was teary-eyed knowing that he had won the elusive Copa. He then video-called his wife Antonella and their kids at home in Argentina to share the moment with them. Incidentally, he lifted the trophy the year after Argentinean superstar Diego Maradona died. The current football free agent dedicated the victory both to Maradona and the whole country. “Diego was surely urging us on, wherever he is,” Messi said of the legend, who was also his coach during the 2010 World Cup.

With the coronavirus pandemic still raging on in South America, Argentina did not organize celebrations in conjunction with the Copa Victory. In fact, their homecoming was a subdued affair, as the squad just made a brief stop at the football federation headquarters before being dispersed for the pre-season break. However, thousands of supporters defied strict restrictions and welcomed their heroes in the streets.

Messi said to the fans, “To continue to party we must continue take care of each other – let’s not forget we have a long way to go to get back to normality. Use this happiness to gather strength to fight this virus together.”

The world is also awaiting Messi’s decision to re-sign with FC Barcelona. There have been issues in the last few years in Messi relationship with Barca, but the management is holding out hope that he will sign again. They even signed his Argentina teammate and friend Sergio Aguero to convince him to stay. We will see how this chapter unfolds in a few days.