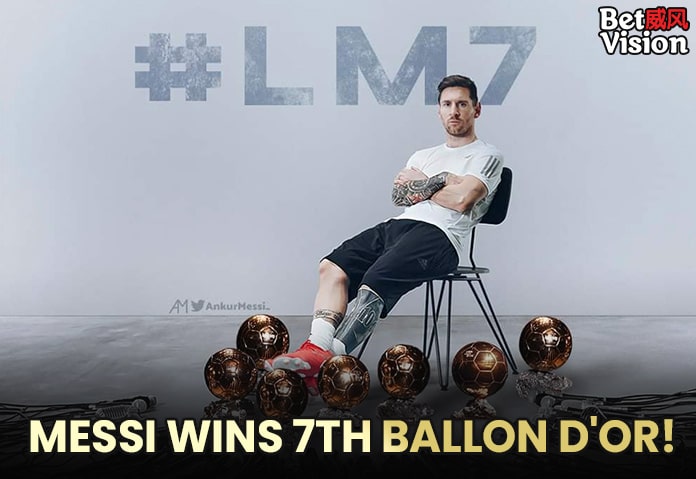 Messi wins 7th Ballon d’Or (Sports News) – Argentinian superstar Lionel Messi confirmed his status as the best in the world when he was awarded by news magazine France Football the Ballon d’Or for 2021. This marked the seventh time he received the award — the only person ever to do so.

This also puts him ahead of his closest rival, Cristiano Ronaldo, who was won five Ballons d’Or. Ronaldo himself placed sixth in the voting this year.

Messi won by getting a total of 610 votes. Even with respectable club stats, like being La Liga’s top scorer and helping FC Barcelona win the most recent Copa del Rey, his vital role in winning the Copa America for Argentina for the first time in nearly 20 years has helped him clinch the award.

Apart from that, this is the first time that he received the honour as a professional player of Paris Saint-Germain. Before joining the Ligue 1 club on a free transfer from longtime club Barcelona, he won the 2009, 2010, 2011, 2012, 2015 and 2019 Ballons while with the Blaugrana.

The Ballon d’Or selection process began with the creation of a 30-player shortlist of nominees. A jury of voters was then compiled by picking international journalists to make their selection of the top 5 footballers in the world. This selection is based on performance, player class and overall judgement of the player’s career.

Below is the full list of the Ballon d’Or:

HERE IS THE WINNER!

“I’m really proud to win the France Football Ballon d’Or once again,” Messi said, as he accepted the award at Paris’s Theatre du Chatelet “It’s incredible to win it for the seventh time. I would like to thank my family, my friends and all the people who follow me and always support me, because without them I couldn’t have done it.”

“It is a special year for me with this Copa America title,” said Messi while he described his experience of winning his first major international trophy. “It meant a lot to win at the Maracana stadium and I was so happy to celebrate with the people from Argentina.”

“I don’t know if it’s the best year of my life, I’ve had a long career, but it was a special one with the title with Argentina after the tough times and the criticism.”

Messi also paid tribute to Robert Lewandowski in his awarding. The 2020 edition of the Ballon d’Or was cancelled due to the COVID-19 pandemic, and many believed that the Bayern Munich star would have won the honour had the awarding ceremony pushed through.

“You deserve your Ballon D’Or,” Messi said directly to Lewandowski. “Last year, everyone was in agreement to say that you were the big winner.”

Lewandowski, who scored more than 60 goals in the calendar year, settled for the “Best Striker” prize.

Apart from the Ballon d’Or, there were other awards given out. These include: