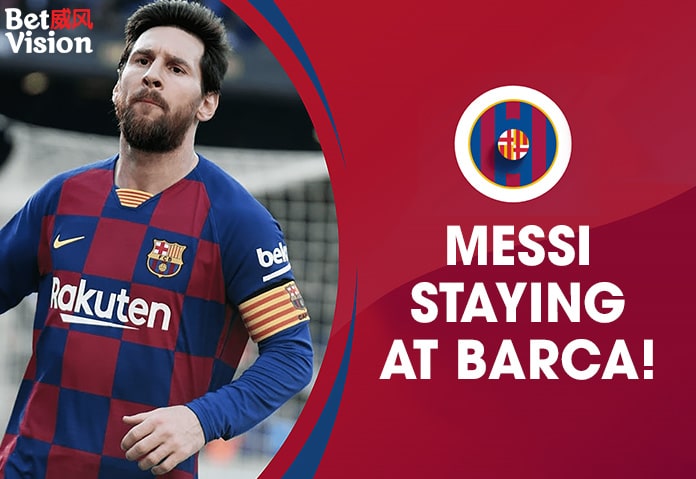 The Argentinian’s previous contract with the legendary Catalan club, which was $594 million USD/4 years, expired on 30 June 2021, making him a free agent. There was word of offers from clubs such as Paris Saint-Germain and Manchester City to bring in the Barca captain, as he declared that he was ending a 20-year relationship with the Blaugrana. He instead decided to sign with them again, and he will be taking a 50% wage cut from the earlier contract.

Right now, the superstar is vacationing in Argentina with his wife and children. after leading his country’s side to victory in the Copa America. Messi had just won his first senior international trophy in the event. This was the one honour that has eluded him after winning Spanish and European trophies with Barca, and being awarded the Ballon d’Or a record six times.

Messi Staying at Barca - Timeline of the Decision

There has been doubt before if Messi would stay at the club, having had issues, and failing to win the La Liga title last season. In the past year, Messi also expressed his desire to leave when Barca lost to Bayern Munich 8-2. He also had a falling out with then president Josep Maria Bartomeu, when the latter blocked his departure from Barca. Eventually, Bartomeu resigned, and former president Joan Laporta, who had a good relationship with Messi dating back to his first days with Barca, was elected to the top post.

This was a sign that Messi was leaning towards staying at Camp Nou. However, Laporta wished to come up with an agreement before the expiration of the forward’s contract, but the club’s debt of over 1 billion euros made it impossible. To cope, cutbacks were instituted, and Messi would need to take the cut in salary.

Messi Staying at Barca - Players Involved in the Deal

This was a sign that Messi was leaning towards staying at Camp Nou. However, Laporta wished to come up with an agreement before the expiration of the forward’s contract, but the club’s debt of over 1 billion euros made it impossible. To cope, cutbacks were instituted, and Messi would need to take the cut in salary.

In addition, signing of fellow Argentinian Sergio Aguero, Memphis Depay, Eric Garcia and Emerson Royal may serve to reinvigorate Barca and Messi’s quest for more domestic and European silverware.  This may however come at a cost as Antoine Griezmann may be traded. The French forwad, who was acquired for 120 million euros in 2019, is in talks for a swap with Atletico Madrid’s Saul Niguez to help reduce the wage bill.

Other big names are also in consideration for departure from the club, in addition to fringe players like Carles Alena, Junior Firpo, and Jean-Clair Todibo being let go in advance.

Lionel Messi joined FC Barcelona’s academy in 2000, and has become arguably the club’s greatest player since then. He played a total of 778 games for the Blaugrana, overtaking Xavi Hernandez’s appearance record. He is also the club.s leading scorer, having made a total of 672 goals. All in all, he has won 10 La Liga titles, four Champions Leagues and seven Copas del Rey.