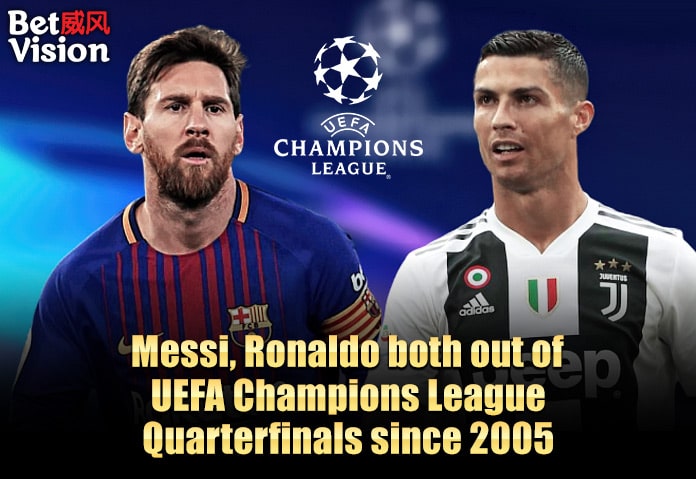 Messi and Ronaldo out! (Sports News) – Lionel Messi and Cristiano Ronaldo will both not be playing in the quarterfinals of the UEFA Champions League for the first time in 16 years. The two, touted to be the greatest football players in the world, dropped their matchups as Juventus fell to Porto 4-4 on aggregate points and away goals, and Barcelona surrendered to Paris Saint-Germain, 2-5.

Messi and Ronaldo - Struggles in the Game

Both Juve and Barca lost in the first leg of the round of 16. While Barca had a taller order after losing 1-4 at Camp Nou, Juve stood a better chance of closing the 1-3 deficit they got in the initial leg at Estádio do Dragão.

This was a huge setback for both Messi and Ronaldo. Lionel Messi, however, found redemption in his own leg by scoring a goal at Parc des Princes before the end of the half. The Argentinian was given a penalty kick, but PSG’s Keylor Navas was able to put it away. The second leg ended in a 1-1 draw, with Kylian Mbappe scoring for the French side.

On the other hand, Cristiano Ronaldo could not lead the comeback for his team, leaving Federico Chiesa and Adrien Rabiot to score 2 and 1 goals for the Turin-based club, respectively. While they tied Porto, the Portuguese club led on away goals, giving them the chance to advance to the next round.

End of an Era for Messi and Ronaldo?

This ends a long streak of appearances by the fierce rivals, whose exploits in both club and international football have dominated the headlines. This became more pronounced in La Liga, where Ronaldo, who played for Barca arch nemesis Real Madrid from 2009-2018, battled in many memorable matches against Messi in the El Clasico, Spain’s biggest derby game.

Rumours are swirling that the fixture may be Leo’s last CL in a Barca kit. Ronaldo, meanwhile, has one more year left at Juve, who has claimed the extension of his contract was not on the agenda yet. For now, the world awaits what’s next for Messi and Ronaldo.

Stay updated on the latest news in sports, as well as in online sports betting in Singapore. Bookmark our page or follow us on Facebook, Twitter, Instagram, and Pinterest! Looking for on the go online betting options, check out the BetVision App! If you want to get started on playing, check out our banner below! or register using the button above!