Home News Koeman sacked by Barça! Xavi to be next coach? 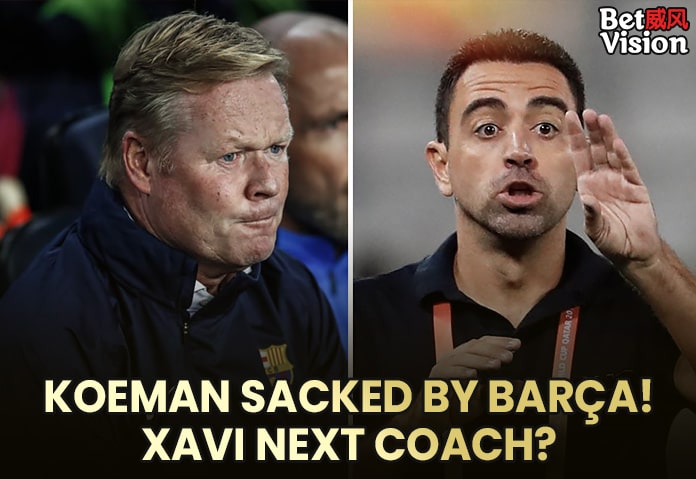 Koeman sacked by Barça (Sports News) – Ronald Koeman, manager of FC Barcelona for over a year, was sacked by the organisation after he was unable to overcome a slow start to the season. Club legend Xavier “Xavi” Hernandez is currently the frontrunner to replace the beleaguered coach.

Barça president Joan Laporta was reported to have lost faith in Koeman for many weeks now, but the Dutchman stayed on as team boss. However, after the Blaugrana bowed to Real Madrid in the El Clasico (1-2) for the third consecutive time, and losing 1-0 to Rayo Vallecano yesterday, Laporta had had enough.

The Catalan club released this statement upon his departure: “FC Barcelona has dismissed Ronald Koeman tonight as coach of the first team. Club president Joan Laporta informed him of the decision after the defeat against Rayo Vallecano.

“Ronald Koeman will say goodbye to the squad this Thursday at the Ciudad Deportiva. FC Barcelona wishes to thank him for his service to the club and wishes him all the best in his professional career.”

Koeman, a former player and coach of the Netherlands national team, was appointed as Barca’s manager in August 2020, taking over after Quique Setien.

Koeman saw his side struggle in his first season in charge, but did manage to bring home one piece of silverware in the form of the Copa del Rey.

However, more trouble happened in the offseason. While big names such as veteran Sergio Aguero were brought into the club, its prized superstar Lionel Messi departed, as Barca were unable to re-sign him due to their dire financial situation. The post-Messi Blaugrana were a disappointment in La Liga, placing 9th in the table as of this writing (W4 D3 L3). They have also struggled in UEFA Champions League, losing two out of three matches and conceding 6 goals to only one scored.

Xavi, who played for the Barcelona first team from 1998 to 2015, was offered the position of manager upon Koeman’s sacking.

The 41-year-old is currently the coach of Al Sadd, the club he played for four years after leaving the Blaugrana. He is said to have an exit clause with the Qatari side; however Xavi has expressed his desire to move back to Barcelona. The Catalonia-based club has also expressed its willingness to pay its longtime superstar the necessary fee.