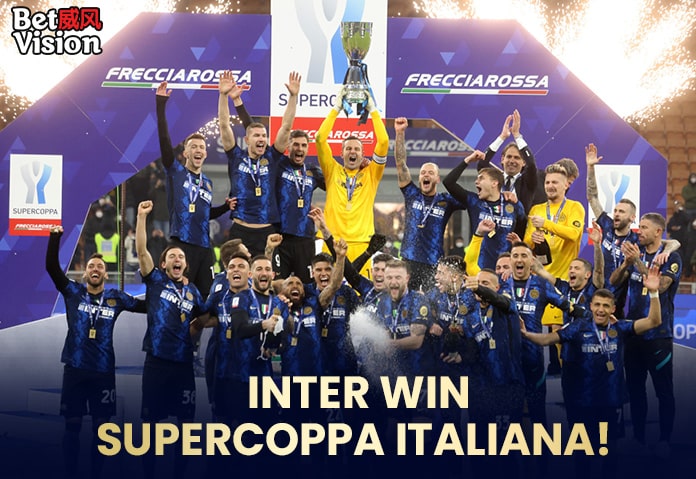 Inter win Supercoppa Italiana (Sports News) – Inter Milan were crowned winners of the Supercoppa Italiana after beating Juventus in a 2-1 Derby d’Italia thriller. Alexis Sanchez’s late goal sealed the victory for Nerazzurri just as the game was about to go to penalties.

The Supercoppa is traditionally the seasonal clash between the Scudetto holders (Inter Milan) and Coppa Italia winners (Juventus). The game used to be held at the beginning of the new season, just like England’s FA Community Shield, but has now shifted to December or January.

Heading into the game, Inter Milan had a full squad at their disposal. Edin Dzeko had fully recovered from Covid. Juventus, on the other hand, lost star forward Federico Chiesa due to a knee surgery. Defender Leonardo Bonucci was not also fully healthy, while Matthijs de Ligt and Juan Cuadrado were serving suspension. Also unavailable where Wojciech Szczesny (Covid protocol), and Aaron Ramsey and Danilo (injured).

The first chance in the derby came from Edin Dzeko scored a header over the bar from Ivan Perisic’s cross, then Stefan de Vrij nodded wide on a caroner. After 20 minutes, Juve was on a roll, with Milan Skriniar’s blocked Weston Mckennie met Federico Bernardeschi’s roll from four yards.

But the breakthrough came halfway through the first half, Alvaro Morata’s cross was then deflected into the six-yard box, and McKennie got a free header, going past De Vrij.

In just 10 minutes, the Nerazzurri were able to level. Mattia De Sciglio chased down Ivan Perisic’s back heel and didn’t notice Dzeko coming behind him, getting to the ball at once and going down. A penalty was awarded and Lautaro Martinez struck his kick into the top corner.

After the break, Bernardeschi went wide from 14 years when undisturbed, then went over the bar after getting away from the defenders. Mattia Perin later had a great save as he tupped Denzel Dumfries header over. Martinez tried for a late winner, but his header from Perisic’s cross was saved by Perin.

When play resumed to resolve the 1-1 deadlock, Alexis Sanchez then turned a free header inches wid on Calhanoglu’s corner, with Paulo Dybala was off target from distance, and Marcelo Brozovic was charged in the box.

And just when the game was headed towards penalties, the unthinkable happened. Federico DImarco’s cross was chested by Alex Sandro lightly. Matteo Darmian also distracted Giorgio Chiellini, leaving Alexis Sanchez went for the tap-in before Rugani to win the Supercoppa.

Manager Simone Inzaghi, who celebrated his first-ever title with Inter, acknowledged the rival side’s tenacity and fighting spirit. “We faced a strong team that played like Juve. They didn’t create many chances, as we did well, but the victory was deserved against a great opponent,” the Nerazzurri boss told Sport Mediaset.

“Juve were always in the game, they allowed us possession, but we saw beating them is never easy. I had some fortunate previous experiences against them in the Supercoppa, we won the first trophy in front of our fans, so I am very happy.”

“Lautaro Martinez and Dzeko had worked so hard, and Dimarco was crucial for the goal. We wanted at all costs to win, because Inter hadn’t got the Supercoppa since 2010 and 12 years is frankly too long for these fans.”

With the victory, Inzaghi won his first title since taking over Nerazzurri. He has won previously twice, beating Juventus in 2017 and 2019. Meanwhile, Juventus’ Massimiliano Allegri suffered his fourth loss in the SuperCoppa final, alongside with three previous wins.

Inzaghi also described the feeling when Inter President Steven Zhang, who just arrived from China, celebrated with the squad during the trophy lifting. “He was very happy. He congratulated us, the lads as always were really pleased and said they’d like a prize! I think the President will give it to them,” he said.

Messi Sets a New Record at Barca Amidst Transfer Rumors –...