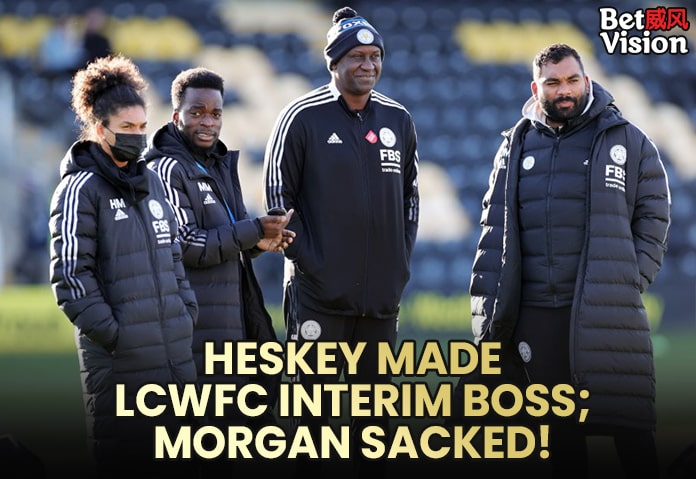 Heskey, who was also recently promoted to women’s head of football development by Leicester, will be overseeing training for the team for the Women’s Continental Cup on December 5, where they will face Manchester United. A search for a permanent manager will be conducted accordingly.

“Retention of its FA Women’s Super League status is central to the Club’s vision for the long-term development of women’s football in the city,” said Leicester City in a statement. “The Club feels a change in leadership is now necessary to give the team the best possible chance of achieving this in the remaining months of the season.”

Morgan, who became LCWFC manager in 2014, expressed his own disappointment for the campaign. “This season has been disappointing, with injuries contributing to a difficult start, but we haven’t achieved the results we had hoped for,” he said in a statement. “I wish the club, the staff and the players my very best.”

Morgan last season led the Foxes to promotion to WSL, the top-flight of female football in England, with assistance from Heskey. The former Leicester player himself (1994-2000) became team ambassador and eventual football development head at the club.

However, LCWFC have lost all eight games this season, resulting in them without a point and at the bottom of the league table. This prompted an overhaul in coaching, with assistant manager Michael Makoni and first-team coach Holly Morgan also leaving the club.

Heskey Made LCWFC Interim Boss - His Thoughts on Gerrard

Emile Heskey will prepare the team for their next match...🔵🦊

The appointment brings Heskey into a new and exciting football role in his career. He, in a recent interview with British publication The Daily Mirror, also happened to share insights on his former Liverpool teammate, Steven Gerrard, who was recently appointed as Aston Villa’s new manager. Heskey himself played for Villa from 2009-2012.

The 43-year old, who was with the Reds for four years, was all praises for Gerrard. “You’ve got to remember that after Liverpool under-18s everyone was saying ‘is he good enough to go to Rangers?’ but he went there at a time when Celtic were dominating, he took that challenge and turned it around,” Heskey said. “Not only that, he made a name for himself in Europe, and now he’s back in the Premier League. He’s at a big club, but they’re not doing so well. But it will only be a matter of time before he starts pushing them up the table again.”

The former England international predicts Gerrard will be successful, with their former Reds teammate Gary McAllister serving as his right-hand man. “He was Gerrard’s assistant when I was at Villa, so he’ll know the club and understand everything there,” he says.

Heskey also believes that their former manager, the late Gérard Houllier, will also be an influence on Gerrard. “When you’ve been taught by one of the best you’ve always got to take certain bits from it. Stevie will bring his own qualities as well because he has that experience now.”