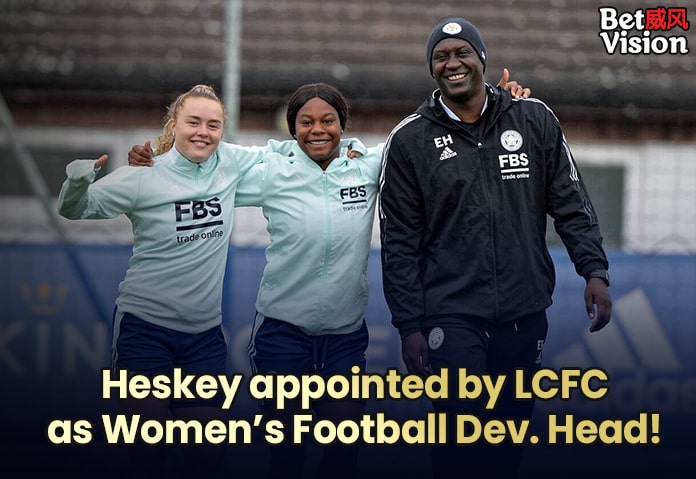 Heskey Appointed by LCFC - From Mentor to Executive

In 12 months of being LCFC Women’s brand ambassador and player-mentor, Heskey has helped develop the side to become one of the best women’s teams in the country. The former England striker was instrumental in the club’s process in its first year as a fully-professional team upon acquisition by Thai company King Power International.

His efforts in getting LCFC Women to adapt to the professional game propelled them to win the Women’s Championship, thereby earning promotion to the FA Women’s Super League (WSL), the top-flight league of women’s football in England.

These accomplishments have resulted in Heskey being promoted to his first football executive position. In the process, he becomes one of the only black people in an executive role in English football. In his new role, the former Leicester City standout will oversee coaching, performance and recruitment in the club.

Having 500 appearances and 110 goals in the English Premier League, and having 62 caps for the Three Lions, the 43 year-old hopes to bring his winning mentality to LCFC Women. As a graduate of Leicester City’s Academy, Heskey is working with an organisation a close to his heart.

Read what he had to say about taking on the role 👇

“This is a fantastic opportunity. I’ve loved every minute of working with LCFC Women in the last year,” shares Heskey in an official release from Leicester City. “We have a strong infrastructure of staff, a talented squad of players and excellent backing from the Club to go on and make a sustained impact on the women’s game. Susan Whelan [Leicester City Chief Executive], in particular, has been a real driver in this, taking the decision to host matches at King Power Stadium to increase exposure and to move the women’s team into Belvoir Drive to give us an elite facility in which to operate every day.

“The Club has made a lot of progress in a short period of time since turning professional, which means we have some work to do to make sure our progress is sustainable,” Heskey continues. “Through ensuring we have appropriate guidance and support in place for our players and staff, I’m confident we’ll achieve that and successfully establish the Club among the leading teams in the women’s game.”

Heskey also said that Leicester Women hope to follow the example of Chelsea to become one of the biggest sides in the WSL, while urging LCFC to be patient in their second season as professionals. He praised Chelsea’s efforts for their women’s side, stating that they’ve “really backed their women’s football.”

“They’ve got a fantastic manager, great players,” Heskey shares in an interview with Sky Sports. “That  is where you want to be, but they’ve been doing that for 10, 12 years.“ “This is our second year professionally, so we’re building, and the fact the club are backing us this way is brilliant.”

Heskey also praised the Leicester City organisation for their commitment to the women’s team. “I think the club have been fantastic, really putting their backing behind it,” he shares. “This is Leicester City; it’s not the men’s and the women’s. We want it to be the same and that’s something the club have said time and time again.

“I have a connection with the men’s side and a lot of people are still there from when I was playing, so I know a lot of these people. We’re going to tap into the resources in the men’s side. You’re looking at recruitment and all these best practices – they’ve known it for years. Their recruitment has been fantastic, so we can tap into that. I’ll be the bridge.”

We at BetVision congratulate Emile on his new role, and wish him the best of success!

🗣️ "There's some fantastic players on show as well but if you don't see them you don't get to enjoy that."

Leicester Women Head of Football Development Emile Heskey says their ambition is to be as successful as Chelsea and follow their example in backing the women's team. pic.twitter.com/vjmJULjQeG