Home News European Super League Collapse: How It Unfolded, and What Happens Next? 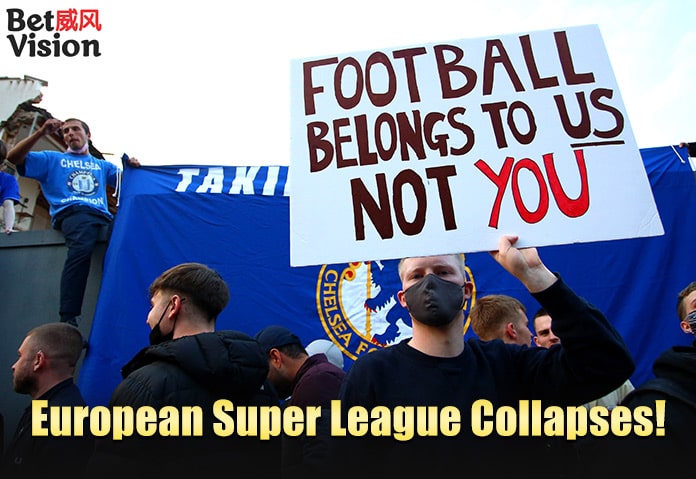 European Super League collapse (Sports News) – The proposed Super League that 6 Premier League members, 3 La Liga members and 3 Serie A members brought forward has been discontinued, amid backlash from governing bodies FIFA and UEFA, football fans, and players and coaches from the clubs themselves.

The league – whose members included AC Milan, Arsenal, Atletico Madrid, Chelsea, FC Barcelona, Inter Milan Juventus, Liverpool, Manchester City, Manchester United, Tottenham Hotspur – was supposed to rival the UEFA Champions League format, currently Europe’s top annual competition. Owners were not satisfied about how the game is being run, which is why they proposed the league, which was set to be backed up by $6 billion in debt financing by JP Morgan.

After the surprise European Super League announcement on April 18, many football fans around the world, from Europe to as far as Asia reacted to the news. It angered supporters of these clubs, who considered the move controversial because the members would not be relegated, thereby keeping funds within the elite clubs’ circle.

Chelsea was the first club to indicate that they would be leaving the European Super League, as fans protested outside Stamford Bridge during a match. Manchester City then followed suit, releasing an official statement about their withdrawal from the proposed league.

Liverpool owner John Henry released a video wherein he apologised to the club’s fans for the disruption he caused over the last 48 hours.” Arsenal, for its part, issued an apology via an open letter on its website; in the letter, they stated that they did not intend to cause distress, but when the invitation to join the league came, they did not want to be left behind to ensure that they protected the club and its future. Manchester United vice chairman Ed Woodward also confirmed that he is stepping down at the end of 202, owing to the repercussions of the clubs involvement in the proposed European Super League.

Also, according to Sky News, Premier League CEO Richard Masters has also handed down an ultimatum to executives linked with the Super League to resign from key working groups.

Juventus chairman Andrea Agnelli also claims that he broke the trust of supporters with his involvement in the European Super League project. In light of recent developments, he realized that the project could not proceed

Valencia president Anil Murthy believes that the idea could be proposed again by the same people. According to him, “the concept of the European Super League is not new but the reckless manner in which the cards have been shown told us that these guys are not going to give in so easily. We should be talking, preparing on how to responds when this happens again because it will happen.”

In the wake of the European Super League controversy, UEFA has confirmed that there will be huge changes to the Champions League, which will please all clubs involved:

With this system, there will be more matches, since the teams will play as much as 19 games leading to the final, as opposed to 13 in the current setup. Furthermore, this will ensure quality matches to the delight of football supporters across the world.