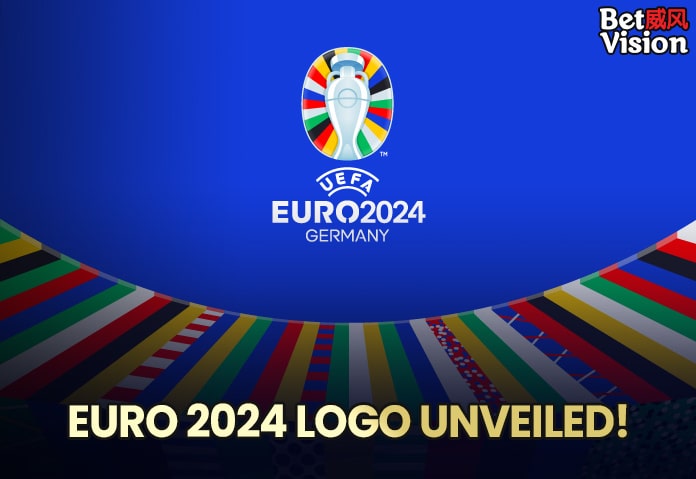 EURO 2024 logo unveiled (Sports News) –With less than a thousand days to go before the next European Football Championship in Germany, UEFA officially unveiled the competition’s latest logo at Berlin’s Olympic Stadium.

The logo was revealed in fantastic fashion in a light show at the legendary stadium. In attendance were UEFA president Aleksander Ceferin, German Football Association (DFB) interim president Rainer Koch, EURO 2024 tournament director Philipp Lamm, and the mayors and representatives of the home cities, high-level members of the German federal government and other guests.

EURO 2024 Logo Unveiled - About the Design

The official UEFA EURO 2024 logo shows the prize of the tournament, the Henri Delaunay Trophy with 24 coloured slices around the trophy. These represents the participating nations. Also, the ten host city logos feature the chosen landmarks of the of the cities, all located in Germany. The cities are: Berlin, Cologne, Dortmund, Dusseldorf, Frankfur, Gelsenkirchen, Hamburg, Leipzig, Munich and Stuttgart.

The logo was borne out of a collaboration by UEFA, the German Football Association (DFB) and the ten host cities, which began in September 2018, when the host association was announced. Portuguese creative agency VMLY&R Branding was in charge of designing and developing the brand.

A new slogan for the tournament was also chosen: “United by Football. Vereint im Herzen Europas.” According to UEFA’s official website, the slogan – which was also used in the bidding process and selected along with the host cities — “strengthens the message of unity, togetherness and inclusion.”

This will be the first time the nation of Germany will be hosting the event since reunification in 1990; the now-defunct West Germany hosted in 1988. Meanwhile, in the recently-concluded EURO 2020, which took place across a number of nations in Europe, the German city of Munich hosted four games.

The 51 matches of the next European Championship is set to take place from 7 June – 7 July 2024. The whole schedule will be released by early 2022.

“It is great to see the logo of UEFA EURO 2024 come to life at the iconic Olympiastadion,” shares UEFA boss Aleksander Ceferin. “From now on, the tournament has a brand identity which reflects the ambition we have together with the host association and host cities: a EURO which is truly for everyone. For one month, we will be united by football in the heart of Europe.”

“EURO 2024 will be a EURO for all and we look forward to welcoming fans from across Europe and the world to Germany in the summer of 2024 to celebrate a great football party together,” explains EURO 2024 tournament director Philipp Lamm. The logo and brand identity for the tournament convey this message perfectly.”