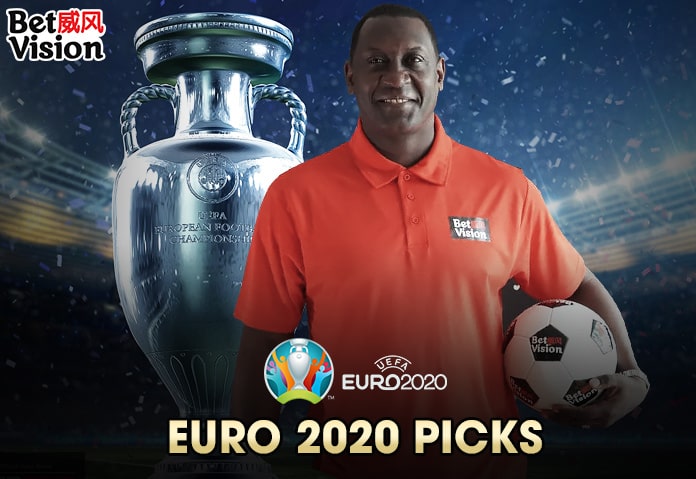 Emile Heskey EURO 2020 Picks (Knockout Stages) (Sports News) – The EURO 2020 group stage matches have ended, and the knockout stages are underway. So we sat down with BetVision Brand Ambassador/English football legend Emile Heskey to talk about his thoughts on the tournament so far, the players and teams that have impressed him the most, and his predictions for England and the EURO knockout stages. Let’s now hear from Emile himself!

Emile thinks that the performances of England in the group stage have been “cautious.” “There’s a lot of pressure going into tournaments, from media and on ourselves… It was always talked about, England never winning their opening match in a EUROs before, and there was added pressure…but they won that game. They drew the second game against Scotland, and people said that they were overcautious and didn’t play well. And they beat Czech Republic. So to say that you’re gonna go to the tournament and not concede a goal after three games and get seven points out of that, you’ve got to be happy.”

Emile believes that England “must come out of their shell a little bit.” “In the knockout phases, you’ve got to have a go,” he says. “We’ve got fantastic young players, exciting players that know their duties. So it’s time that we let them go a little bit, because obviously the next game is never going to be easy. So let them go and let them express themselves.”

Emile gave a list of the players that stood out for him in the first three matches of EURO 2020:

Tyrone Mings – “Tyrone Mings has been impressive defensively. There has been a lot of pressure on Tyrone because of Harry Maguire not being there (in some games).”

Harry Maguire  – “He’s come back for one game and has shown why we’ve missed him.”

Raheem Sterling – “I think Raheem has taken on himself as well because there was a lot of pressure coming into the tournament. A lot was said, whether he should or shouldn’t be there, and he’s shown why he should.”

Jack Grealish – Controversial for not making the starting lineup early on, Emile said that “he has proven why he should have been starting all along.”

Bukayo Saka – “He put on a fantastic performance and became man of the match. He made a difference with the driving of the ball, causing havoc and pulling out defenders from their positions.”

Emile’s personal choice of lineup for England for the remaining EURO matches would be a 4-3-4 formation consisting of the following:

In the round of 16, England is facing Germany: a side that’s very unfamiliar to Emile. He scored one of the goals in a memorable 5-1 rout of the Mannschaft in Munich on 1 September 2001. According to him, the upcoming game with Germany “is a difficult one to judge, because they’ve been so up and down. They’ve got great players, but are they a tight-knit team like the Germans usually are? Are they as efficient as they usually are?”

“If you look at the Hungary game (2-2), where they were lucky in the end,” Emile continues. “They rode on their luck and they were able to do that. One thing I always say is that when it comes to competition football, Germany know how to get over the line, so it’s going to be a tough game for us.”

With that, Emile gave us his fearless prediction: England to win, 1-0.

Finally, we asked Emile which team he thinks is going to win EURO 2020. While he believes his beloved England could pull it off, he mentioned another side that has what it takes to dominate the tournament.

“If it’s not England, I would have to say Belgium,” says the legendary footballer. “They’re seeded at the top (of the world rankings), and they’ve been threatening for years to actually really do something good with this crop of players. And now they’re getting to an age where if they don’t do it this year, they might still be able to go on with this crop. They’ve been together now for six years or so, majority of them, and they’ve got some fantastic players, and got a good manager as well.”

Want to see more of Emile’s EURO predictions and winning tips in the knockout stages? Read them all here!