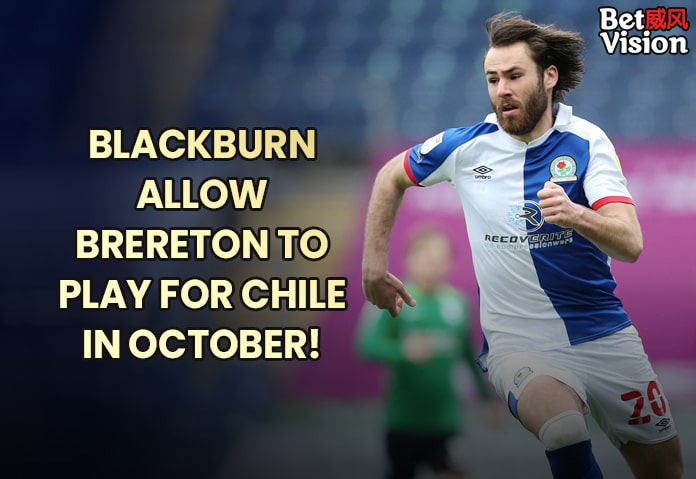 Blackburn allow Brereton to play for Chile (Sports News) – Blackburn Rovers, official partner of BetVision, have reached an agreement with Chile’s football federation regarding striker Ben Brereton Diaz. The 22-year old, who has had five caps and one goal for Chile, has been cleared to play in South America in October for the next round of World Cup qualifiers.

He will feature in the qualifying matches against Peru on 7 October and Paraguay on the 10th.  However, he will miss the match on the 14th against Venezuela to begin a quarantine period that will limit games that he misses for Blackburn.

The 22-year-old Brereton was unable to fly to his mother’s birth country during the September break because of COVID concerns. However, due to Chile invoking a FIFA rule which would suspend players who fail to show up for national duty, Brereton was expected to miss Rovers’ match with Luton Town. It was only after Chile’s withdrawal of the complaint that he was allowed to play that particular match.

Brereton is one of many England-based players who were deemed ineligible to play for their sides. Four national associations – Chile, Brazil, Mexico and Paraguay – had requested FIFA to place restrictions in light of the clubs not allowing them to release the players for international duty.

This demand for restriction enforcement was dropped by the four nations last Friday night, in a last-minute move, after extensive talks with FIFA, which otherwise would have seen 12 English-based players suspended after five days. Earlier, Premier League clubs had an agreement that they would not release players for the September break to nations in the United Kingdon’s COVID “red list”.

FIFA has stated last that there has been “constructive dialogue” following a letter by the association, England’s Football Association (FA) and the Premier League to UK Prime Minister Boris Johnson regarding the matter.

🇨🇱🤝 #Rovers have reached an agreement with the Chilean FA for Ben Brereton Diaz to be available for both club and country going forward.

👏 We will be cheering you on in the October break, @benbreo!

“We’ve tried to do a deal with Chile,” Blackburn manager Tony Mowbray shares. ”They have withdrawn they complaint to FIFA, we’ve said that Ben can go in the next international window, and let’s see what the world is like then, whether red zone countries are still red zone countries.

“I think we’ve agreed with them that he can play the first two games. In reality, if he plays the third game, he’s going to miss potentially three or four matches for us, with a 10-day quarantine. So if he finishes after the second game, comes back, then he probably only misses a game or two for us.

“Let’s see how that works. Our hope is that the world is in a better place in a month’s time and the Government look at the situation with the professional game and see whether there’s going to be an allowance for footballers.”

With the matter settled, Brereton is now set to continue helping Rovers in their EFL Championship campaign. In fact, he has been involved in goals in the Lancashire-based clubs last two matches.

The match with Luton saw Brereton providing an assist to the side’s second goal by defender Harry Pickering. The game eventually ended in a 2-2 draw. In the next match with Hull City, Blackburn would finally get the win, as the Chilean international scored the second of two goals in a 2-0 win. His contribution, plus the earlier goal by defender Daniel Ayala, were scored four minutes within each other in the second half.

Blackburn are currently 7th in the EFL Championship table. They will next face Barnsley FC in an away fixture on Saturday, 18 September at 10 PM (SG Time).